Star Trek: The Next Generation IDW 20/20

"Star Trek: The Next Generation IDW 20/20" is a one-shot special comic published by IDW Publishing, marking the 20th anniversary of the company.

Twenty years before he took command of the USS EnterpriseD, Jean-Luc Picard sat in the captain's chair of the USS Stargazer. Picard served with distinction aboard the Stargazer for many years on his way to becoming the most respected captain in Starfleet. But in this early mission, Picard showed that even he is merely a man. Featuring an adventure early in Captain Picard's career! Reuniting Fallen Angel dream team and Star Trek fan favorites, Peter David and J.K. Woodward! Celebrate 20 years of IDW with new stories about your favorite characters!

Welcome to IDW's "20/20" event! Celebrating IDW Publishing's 20th anniversary, this series takes a look at some of our favorite storylines, jumping twenty years either in the future or the past. Twenty years before he took command of the USS Enterprise-D, Jean-Luc Picard sat in the captain's chair of the USS Stargazer, on his way to becoming a well-respected Starfleet captain. But on this early mission in his captain's career, he has yet to earn that respect… And we learn that his path to becoming the captain we know wasn't always an easy one.

"Newly minted" Captain Picard worries about what his crew and his superiors think of his performance. Jack Crusher brings his fiancée, Cadet Beverly Howard, aboard, against Picard’s wishes. Picard makes it clear that Beverly is to stay out of the way during their current diplomatic mission to Tellerux IV, a new Federation member world facing internal uprising. Over Jack’s objections, Picard beams down to meet with the planetary leader, the Sensate. During the meeting, the Sensate’s brother, Aminus, leads an attack on the building, and Picard is badly injured and captured. Aminus offers to ransom Picard to Jack in exchange for all of the starship's weapons, and Picard orders that no Stargazer personnel beam down to rescue him. Jack uses a loophole and sends Beverly, who isn’t actually a member of the crew, to treat Picard’s injuries. She also smuggles in a commbadge, and though it’s discovered, Picard tricks Aminus into getting beamed up himself. Picard threatens the remaining rebels into surrender using Aminus's capture and the Stargazer's weaponry. In appreciation for Beverly’s help, he conducts the Howard-Crusher wedding ceremony before she returns to Starfleet Academy.

The exact timeframe of this story is unknown and the story doesn’t quite fit in with the novel series. Picard states that he’s just begun his captaincy (which would place it in 2333), but Jack Crusher is present and Beverly Howard (born in 2324) is at least 18 years old. The date of 2344 places it “20 years before” TNG (in accordance with IDW Comics’ 20/20 theme) and accommodates Beverly’s age. Beverly is dressed in the same outfit as her Academy action figure by Playmates Toys. 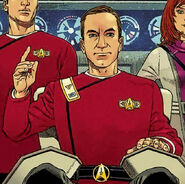 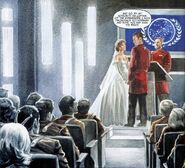 Bev.
Add a photo to this gallery

Retrieved from "https://memory-beta.fandom.com/wiki/Star_Trek:_The_Next_Generation_IDW_20/20?oldid=679631"
Community content is available under CC-BY-SA unless otherwise noted.