Star Trek is a video game. It was released in early 2013 and is was developed by Digital Extremes, previously known for Dark Sector and The Darkness II. The game was unveiled at E3 Expo in Los Angeles.

The game is set in the alternate timeline featured in the recent movies and continues the story of that version of the Enterprise crew. The players can control either James T. Kirk or Spock in both single player and co-operative modes. In the game, a hostile alien race invades and the crew of the USS Enterprise fight to protect the Federation.

After being pinned by Gorn soldiers, James T. Kirk and Spock are knocked unconscious. When they awake, the two attack one another.

8 hours before this happens, Captain Kirk and Mister Spock are playing chess in Spock's Quarters when the USS Enterprise receives a distress call from Helios Station. Unable to hail or transport the survivors, Kirk and Spock beam to the station. After making their way through the damaged station, and completing a space walk amid a severe stellar storm, they reach a security bunker where they meet Captain T'Mar, an old friend of Spock's. They evacuate to the Enterprise after a transporter failure thanks to Hikaru Sulu.

Safely aboard, T'Mar explains what happened on the station and that the station was part of colonization efforts for New Vulcan. The station was a critical component of the terraforming process; however, for unknown reasons, the station was powered down by orders of Surok. Kirk orders the Enterprise to investigate and beams to the surface. There they encounter Vulcan colonists who appear to be in some kind of trance and openly attack the Enterprise crew. Kirk and Spock find Surok and the Helios Device; however, the Gorn reveal themselves. After a fight where Kirk is injured, he and Spock give chase only for the Gorn to escape with both Surok and the Helios Device requiring Enterprise to pursue. They follow the Gorn to a nearby spatial rift; however, the Gorn travel through before the Enterprise can stop them. Kirk wants to give chase; although, the Enterprise has massive casualties following the attack and - at the behest of Leonard McCoy Kirk agrees to travel to a nearby outpost commanded by Commodore Daniels.

Delivering McCoy and the injured to starbase Frontier 17, Kirk orders Enterprise back to New Vulcan to look for more survivors while he speaks with Daniels. After being escorted and weapons confiscated, Daniels reveals that the Helios Device was built for military purposes and asks if anything came through the rift. Daniels assigns Kirk and Spock to recover the device from the Gorn because of the risk that the Helios Device poses. The station comes under attack shortly afterward by Gorn forces, requiring Kirk and Spock to inform Starfleet of what has happened after the Commodore evacuates. After clearing the station's Mess Hall of enemy forces, the pair search for and rescue Doctor McCoy from a storage room. During the rescue, they learn that the Gorn are using an unknown pathogen to infect personnel. Power is mysteriously restored as more Gorn beam into the station to steal information on the Helios Device. They are forced to override the computer system and then retrieve Doctor McCoy's samples. As they're en route to the shuttlebay to escape the devastated station, Commodore Daniels commandeers the shuttlecraft Galileo and leaves the station. With weapons failing, Kirk and Spock make their way to the power generators to cause an energy surge that could damage the Gorn ship. Accomplishing their objective, and rescuing several Starfleet personnel in the process, they return to evacuate T'Mar only for her to be kidnapped by the Gorn. Spock, while in hand to hand combat with a Gorn, beams the Gorn to the Enterprise for questioning; however, he escapes requiring them to capture him.

After chasing the Gorn through the Engineering Section, Crew Quarters, the Turbolift System, and the Shuttlebay, Kirk and Spock are able to recapture the Gorn Lieutenant and Spock performs a mind meld to learn more about the Gorn. He discovers that the Gorn are an extradimensional race of conquerors who have destroyed all opposition in their home galaxy. The wormhole created via the Helios Device opened a gateway to their galaxy and allowed them entry into Federation territory. This led them to New Vulcan and to capture Surok for more information about the device. When they learned he had no knowledge of the device, they killed him and kidnapped T'Mar. Kirk orders Enterprise through the rift and leads an away team consisting of himself, Spock, Doctor McCoy and Sulu to the surface with Pavel Chekov remaining in command of the Enterprise with orders to leave in 24 hours.

After crash landing their shuttle, the away team encounters to native inhabitants of the world called the Lymax with the majority having been captured and imprisoned. Kirk and Spock, after a brief exchange with Doctor McCoy about his accompanying them on their assignment, skydive to the base of the Gorn outpost to destroy a defensive emplacement. After disabling it, they call in an airstrike from the Enterprise and destroy the turret. Unfortunately, this increases Gorn activity near the Enterprise which, so far, has remained undetected. They make their way into the Gorn Complex to find T'Mar, though they discover that the native population is being used for experimentation and Gorn slave labor. They eventually located Commodore Daniels, who blames Kirk for what happened, but he is killed by the Gorn shortly afterward. They are soon captured and forced to fight several waves of creatures in the arena for the amusement of the Gorn Commander. After defeating the Gorn Champion, the duo are infected with the Gorn pathogen and are forced to fight to the death. They are rescued by Doctor McCoy and Lieutenant Sulu in the now repaired shuttlecraft, who cures Kirk and Spock of the virus and they return to the Enterprise after watching the Gorn Commander's warship depart the surface.

While on approach to Enterprise they discover that the ship is under heavy Gorn attack and have to board the ship via a space jump. When safely aboard the invaded vessel, they beam Sulu and McCoy aboard with orders to help clear the infection. After getting in touch with Montgomery Scott, the pair work to secure Engineering and provide cover for Keenser as he tries to restore the warp core. Once power is back online, they proceed to Sickbay to assist Doctor McCoy with securing the room and releasing the vaccine into the environmental system. Fighting through their own personnel, Kirk and Spock first restore power to the Medical Bay and then return to obtain the medication. They are temporarily diverted to save Chekov and then release the compound into the atmosphere. They immediately return to Sickbay and find it overrun with Gorn after Sulu destroyed the Gorn tractor beams holding the ship. After defeating the attacking troops, they are called to the bridge by Nyota Uhura who is being held by the Gorn Lieutenant. Demanding control over the Enterprise in exchange for Uhura's life, Kirk agrees to turn over control to the Gorn. Instead of transferring control, however, he interfaces with the controls of the shuttle that Sulu and McCoy had left behind and remote pilots the vessel into the viewscreen of the Enterprise. The Gorn are expelled into space following the explosive decompression and the Starfleet personnel are able to regain control over the ship.

With Enterprise recovered, Kirk and Spock lead a rescue mission to the Gorn Mothership to rescue T'Mar and recover the Helios Device. After a space jump to the enemy ship, they infiltrate the vessel's double hull and begin their search. Their investigation reveals that the Gorn employ genetic engineering in this species and those that they conquer. Their investigation is cut short when Sulu informs them that Enterprise is taking massive damage and her shields are down to 30%. Kirk and Spock destroy the tactical computer core as the Helios Device is reactivated. A new spatial rift opens with more Gorn vessels on approach. The duo are able to destroy the Helios Device and then face the Gorn Commander in combat. Kirk rescues T'Mar from the ship while Spock defeats the Commander. They immediately return to the Enterprise.

After returning T'Mar to New Vulcan, the Enterprise is ordered by Christopher Pike to travel to Nibiru on a humanitarian mission.

Throughout the course of the story, several logs are discovered in various locations, belonging to the other members of the Enterprise's senior staff, as well as Daniels, T'Mar, and Abaran.

Several commentaries were also made by Montgomery Scott on the various items and lifeforms scanned by Kirk and Spock with their tricorders.

They ranged from helpful information about the item in question, to anecdotes about past experiences, to personal opinions and other ramblings. It is unclear whether these were logs or just Scotty's verbal responses to Kirk and Spock in written form, as they are not dated and, in some cases unprofessional. For instance, he makes redshirt jokes that are in poor taste. 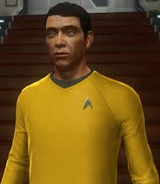 Abaran.
Add a photo to this gallery

Retrieved from "https://memory-beta.fandom.com/wiki/Star_Trek_(game)?oldid=637032"
Community content is available under CC-BY-SA unless otherwise noted.