Although previous volumes were released by World Distributors Limited, the 1981 edition of the series was licensed by Marvel Comics/Grandreams Limited to reprint Marvel's adaptation of TOS comic: "The Motion Picture".

The title Star Trek: The Motion Picture was printed on the book cover and title page, rather than the "Star Trek Annual" title previously seen in the series. The interior artwork was printed in very high resolution on white paper. 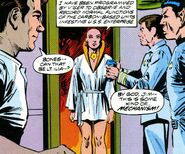