The Star Trek Game was a board game released in 1967 by Ideal Toy Company, the first ever Star Trek major game licensed for sale, and the only one produced during the run of the Star Trek: The Original Series. 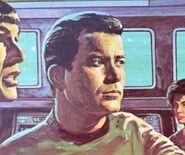 Spaceships.
Add a photo to this gallery

Retrieved from "https://memory-beta.fandom.com/wiki/Star_Trek_Game_(1967)?oldid=685215"
Community content is available under CC-BY-SA unless otherwise noted.