The Animated Series No. One, Two, Three

For the first time, all three books in one volume! Nine thrilling adventures starring Captain James T. Kirk and the crew of the USS Enterprise! 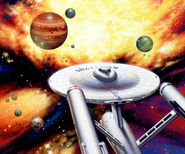