For the first time, all three books in one volume! Three thrilling adventures starring Captain James T. Kirk and the crew of the USS Enterprise! 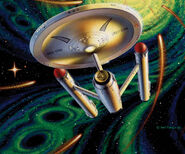 The Enterprise near a jawanda.