This page refers to the 2010 game, for the series the game is a part of see Star Trek Online. For the unreleased version of the game developed by Perpetual Entertainment, see unpublished games.

The game was initially developed by "Perpetual Entertainment" from 2003 until January 2008, after which Cryptic Studios took control of the project.[1]

The game is set in 2409, three decades after Star Trek Nemesis. Players will become either a Federation Starfleet Officer (Either in the Age of Discovery, TOS era or the late 24th century), Klingon Defence Force commander, Romulan Republic captain, or Jem'Hadar First in command of their own starship which they can use to explore the galaxy. Game play will take two forms, that of ship based maneuvers in space, and as part of away teams to starships, planets and facilities.

Cryptic Studios officially announced the development of Star Trek Online on July 28, 2008, as a countdown timer on Cryptic's web site reached zero and the new official site was launched. A letter was sent out from Jack Emmert, the game's online producer, detailing some aspects of Cryptic's approach.

Cryptic originally announced a Windows version of STO. During the Las Vegas conference in August 2008, Cryptic announced that there would be neither Linux nor Mac versions for the original launch, though they did not rule out the possibility of later port releases. Console versions were announced several months before the release, with no specific console platform specified, but Cryptic has since announced that all console versions of their games are on indefinite hold due to difficulties "on the business side of things,"

Star Trek Online was released in North America on February 2, 2010, in Europe on February 5, 2010, and in Australia on February 11, 2010. Customers who ordered the game in advance were able to gain access to the game on January 29, 2010 (before the official release date), via a bonus 'head-start' which was included with pre-order packages.

On August 10, 2008, the Las Vegas Star Trek Convention was held at the Hilton Hotel in Las Vegas. Leonard Nimoy and Cryptic Studios Chief Creative Officer Jack Emmert together revealed the first gameplay trailer, featuring various Federation and Klingon starships in combat with each other and Borg vessels, as well as footage of a Klingon squad boarding a Federation ship's bridge. The release date was not publicly revealed except that it would be less than three years.

Star Trek Online's closed beta test officially began when it was announced on October 22, 2009. Cryptic Studios offered guaranteed beta access to users who bought 6-month and lifetime subscriptions to Champions Online. However, the offer did not explicitly state how early in the beta process the access would be granted. Some pre-order packages included access to the 'open beta' running from January 12–26, 2010.

Due to the Hobus supernova and the destruction of Romulus, the quadrant has become destabilized. The Klingon Empire took advantage of the Romulans' weakness, attempting an invasion. The Federation protested this aggression, leading to weakened relations and finally a breakdown of the Khitomer Accords.

A war finally began with the Klingons, whose empire has now expanded to include the Gorn Hegemony, as well as many other states. Meanwhile, there are other forces causing chaos behind the scenes. Species 8472 has returned, and is quietly manipulating the various races of the alpha quadrant. The Borg have begun a new series of incursions as well.

The references in this section reflect references from the common areas of the game such as introductions and travel between missions. References from specific missions will be listed at the missions' own pages.

As part of the build-up to the game Cryptic Studios's Star Trek Online website has two sections detailing in-universe information as background to the game. The Path to 2409 provides year by year chronological updates running from 2379 up to the start of the game in 2409. Ships of the Line gives history and specifications on starships featured in the game. A third section, Factions, was put up after the game launched; this section provides intelligence information on the various organizations and groups involved in the game's events. All three websites went defunct after Cryptic was purchased by its current publisher Perfect World, though the historical information in The Path to 2409 is also available in-game on the accolades screen.

Star Trek Online is set in an alternate timeline from the ongoing book series by Pocket Books, which is made explicit in STO's tie-in novel The Needs of the Many. The biggest point of divergence is the Borg Invasion of 2381: in STO the Borg never launched a full scale invasion of the Alpha Quadrant, instead harboring and rebuilding their forces after the loss of their transwarp gates before beginning seemingly random raids in 2409. The Typhon Pact was also never created, and the Romulan Civil War of the early 2380s ended slightly differently.

That said, STO frequently uses worldbuilding and setting details from licensed fiction, including Pocket's "novelverse", and some events, such as Ezri Dax commanding the USS Aventine, are mentioned in-game in tooltips or dialogue. The game also incorporates the entirety of the Star Trek: Countdown comic book series into its backstory, and the first expansion, Legacy of Romulus, frequently borrows details on Romulan culture from the Rihannsu series by Diane Duane. 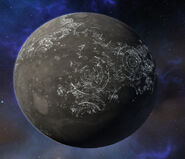