Star Trek vs. Transformers No. 3

5892.7
Prime's Directive, Part Three is the 3rd issue of IDW Publishing's crossover between The Animated Series and The Transformers.

Klingons and Decepticons lay siege to a remote Federation dilithium mine-and the only thing holding them back is the shaky alliance of Captain Kirk and Optimus Prime. But what dark secret is buried beneath the ground... and can this uneasy partnership withstand the revelation?

The Cygnus Seven mine burns beneath the firepower of the Decepticons and the D7. Though Optimus Prime wishes to fight back, McCoy insists he rests until he's healed. But when a group of miners are a risk, Optimus leaps into the fray, using his body as a shield against Airachnid's firepower. Though phasers have no impact on Decepticon armor, Scott and Spock's blasts are at least enough to distract the sadistic helicopter allowing Optimus and the miners a chance to return to safety. As McCoy scolds the Prime's recklessness, Scotty can only wonder what's happened to their friends in the mine.

Several hundred meters below ground, Ratchet finishes wiring Kirk into a machine to bring Fortress Maximus back online. Though Windblade doubts that a human can withstand merging with a Titan, Sulu assures her that if anyone's up to the task, it's Captain Kirk. Once the connection is established, Kirk and Maximus share memories of their pasts before the Titan finds what he's looking for: The perfectly memorized blueprints of the USS Enterprise. As Kirk stumbles out of the chamber (now having earned Jazz's respect), Ratchet gets to work.

On the surface, Starscream's force corners Optimus Prime's group. Though Optimus wishes to distract the Seeker and allow the organics to flee, McCoy and Spock refuse to let him in his injured state. With only one course of action open to him, Spock hands Scotty his phaser and surrenders to Starscream. Beaming down, Kuri takes a chance to boast about the superiority of the Klingon Empire but Spock clarifies that his surrender is to allow the others to go free. The statement brings Prime forward who reiterates Spock's claim. Starscream is unmoved. What's the benefit to him in letting them live? As Prime should be aware given their sojourn on Earth, wouldn't the humans kill him without hesitation?

Any answer that Prime might have offered is cut off when the USS Enterprise bursts forth from the ground beneath them, belting out phaser blasts!

Following close behind is the rest of the away team and the Autobots ready to turn the tide of the battle. As the Enterprise begins to attack the D7, the enemy ship's hull begins to change confirming Optimus's fears. That is not a D7. It is Trypticon!

As the Decepticon Titan's power lays waste to the planet, and Kuri and Starscream bicker, McCoy can only wonder where Kirk has gotten too. The captain and Ratchet are on the bridge of the duplicate Enterprise, though a bridge scaled for Cybertronian lifeforms, with Kirk's thoughts propelling the craft. Despite Kirk's determination, not even the firepower of a Constitution-class is enough to properly wound Trypticon. The Titan's pain however is enough to distract the other Decepticons allowing the Autobots to slowly turn the tide of the battle. As Spock ponders how one man could pilot a Constitution-class, Megatron beams in, remorselessly firing his fusion cannon on the weakened Prime. Accompanying the tyrant is a battalion of Klingon troopers who stand ready to attack... only for Arcee, McCoy, Spock, Scotty, and the miners to be beamed to safety aboard the duplicate Enterprise. As Ratchet reports on their safety to Kirk, the captain begins the "trick".

To the amazement of all, the duplicate Enterprise begins to shift and change revealing it to be Fortress Maximus, or "Fortress Tiberius" given his binary bond with Kirk, ready to fight Trypticon for the safety of the colony. 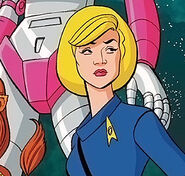 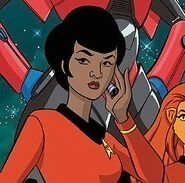