2250
"Starfleet Academy!" was the second annual issue of the DC Comics 1989 series of Star Trek TOS comics. The issue was edited by Robert Greenberger, and written by Peter David. The art was penciled by James W. Fry and Curt Swan and inked by Arne Starr.

In a cornfield in Iowa, Jim Kirk and his older brother Sam discuss Jim's impending departure for Starfleet Academy. Jim's girlfriend Ruth broke up with him the previous night, unhappy with his decision to enter Starfleet. Jim races Sam back to the farm, where a shuttlecraft is waiting to take Jim to the Academy.

As the shuttle descends toward the Academy campus in San Francisco, Kirk is irritated by the snoring of a fellow cadet who has slept through the entire trip. On disembarkation, Kirk is further annoyed when the same cadet mistakes Kirk's bag for his own, the ensuing argument causing the bag to open and Kirk's clothes to spill out all over the plaza. As Kirk picks the clothes up, he snaps at someone standing over him who he thinks is the annoying cadet. To Kirk's great embarrassment, it is Captain Matthew Decker, who seems unimpressed with the suddenly nervous young man.

Kirk writes the first of a series of misleading letters to his parents in which he makes his Academy experience seem better than it is. He tells them of attending an address by Ben Finney, the Dean of Students, who introduces their student contact: a third-year student named Sean Finnegan, who proclaims to the new students that "I am here to be... your friend." Kirk finds his room and is horrified to see it already made into a mess by his new roommate: the cadet who caused the luggage incident, Gary Mitchell.

Kirk requests a new roommate from Dean Finney, who informs him that Mitchell was assigned as his roommate for Kirk's "improvement". The next morning, Finnegan finds Kirk up at dawn, studying. Kirk tells him of his disappointment at having embarrassed himself in front of Decker, who he had hoped would become a mentor to him. Finnegan encourages Kirk to enter Decker's strategy class that morning with determination, but surreptitiously tapes a sign to Kirk's back reading "Call Me Captain Dunsel".

In Decker's class, Kirk wonders why everyone except him is laughing. Decker, noticing the same thing, removes the sign from his back, admonishing him that space does not forgive such lapses in awareness. After class Kirk angrily confronts Finnegan, who tauntingly goads him to punch him, pointing out that doing so would get Kirk thrown out of the Academy. As Kirk subsides, Finnegan shakes hands with him -- shocking him with a buzzer in his hand.

As the term continues, Kirk fails a test of character in strategy class when Decker gets Kirk to agree with him that Garth of Izar was reprimanded for his actions at the Battle of Signet IV -- which he was not. Returning to his quarters, Kirk expresses his frustration at events to Gary Mitchell, wondering aloud if he's good enough to be a captain. Mitchell replies that he would trust Kirk with his life. Kirk seems struck by this for a moment, but then criticizes Mitchell for not studying for their exams the next day. Mitchell reveals that he has a photographic memory and doesn't need to study.

Kirk and Mitchell nonetheless study together for four hours, after which Mitchell suggests they go to a party at which "fun girls" from outside the Academy will be present. Kirk retorts that he does not have the time for parties -- and is not interested in women. As they continue to argue, a trail of smoke curls up from outside their cabin door. Kirk insists on stamping the fire out, then finds he has stepped in something disgusting left there by Finnegan. Kirk tells Mitchell to go to the party and leave him alone.

As Kirk continues trying to study, Mitchell brings the partygoers back to his room. Among them is Kyle, who tells the protesting Kirk not to act so full of himself. Kirk goes out into the courtyard to study. Mitchell sends a blonde science student, Carol Marcus, out after him to cheer him up. Carol brings out a bottle and a couple of glasses. She invites Kirk back to her apartment to study.

At Carol's apartment, Kirk tells her about his breakup with Ruth and about the feelings he has as he gazes at the stars, wanting to meet the beings who live among them. Kirk and Carol kiss. The next morning, Kirk and Carol wake up in bed together. Kirk suggests that Carol transfer to the Academy, describing people who remain on Earth or a space station as "worms" with no brains. Carol angrily heads into the bathroom. Kirk realizes his exam is in ten minutes and rushes off.

Kirk awakens Mitchell, who is still asleep in their room. On the way to the exam Kirk is confronted by Finnegan. Mitchell trips Finnegan up from behind, allowing the two of them to escape. They make it into the exam room with only seconds to spare, rolling down the steps into the room as the door closes and locks behind them. They reach their seats before Decker comes in, although he notices that they are out of breath and that Kirk looks dizzy, correctly guessing that Kirk spent the night with a woman. After the exam, Kirk angrily accuses Mitchell of almost making him miss the test. Mitchell tells Kirk his single-mindedness is making others feel inadequate. Still arguing, they enter their room -- which Finnegan has filled with sheep.

Exams over, Kirk goes swimming and is approached by Carol. He apologizes for his previous remarks. Carol tells him their relationship must proceed on the understanding that they will have no real future together, since Kirk's heart will always be in space. Finney appears and orders Kirk to a meeting of Decker with all cadets.

Decker announces that a cadet has cheated on the exams by creating a false identity and accessing the test two days in advance. The test will be invalidated and the cadets retested the following week. Decker asks the guilty party to come forward and spare his or her classmates from suspicion, but no one speaks. Decker cancels all leaves and restricts the cadets to Academy grounds until further notice.

In their quarters, Kirk and Mitchell discuss the situation with Kyle and Winston, a female cadet. Kyle accuses Mitchell of being the cheater. As Kyle angrily starts to leave, the four students see that the corridor outside is a seething mass of cadets arguing and accusing each other.

Kirk writes his parents again, telling them of the situation and how Decker seems to be waiting for something. Kirk sneaks out that night but is observed by Decker from a window. Kirk makes his way to Carol's apartment and asks for her help in solving the situation. Carol knows people at the Daystrom Institute who might be able to learn the identity of the cheater. She suggests that an Academy cadet she knows in the class ahead of Kirk's can help them get into the Institute after hours.

Cadet Uhura distracts the security guard at the Institute's front desk by asking for directions while Kirk, Carol, and Carol's friend Lynch sneak inside. Lynch uses the Institute's computers to identify those who accessed the exam, but tells Kirk he will not like the answer.

Kirk writes to his parents, admitting that his previous letters were deceptive and telling them how he successfully convinced the other cadets to follow his plan. Decker asks the cadets again which of them cheated, and this time they say they all did it. Decker announces that no one cheated, and that he lied to them as a test of their ability to trust each other. Kirk asks how this establishes trust in commanding officers. Decker orders him into his office.

Decker is in a good mood because it is his son's birthday, and therefore does not punish Kirk. He tells him the cadets pulled together the day after he saw Kirk sneak out and sneak back in. Kirk says he discovered that Decker was the only person to access the exam, and guessed that the accusation of cheating was a test of character. Decker tells him he has potential, but smilingly yells at him to be "less of a smart ass".

Kirk finds Kyle, Carol, Uhura and Mitchell in his quarters celebrating his achievement. A moment later they are joined by Ruth, who is moving to San Francisco, having decided she is not yet ready to lose Kirk. Kirk asks for Kyle's help with a transporter experiment to get even with Finnegan.

That afternoon, during his Kobayashi Maru test, Finnegan is transported away from the captain's chair of the simulator. Kyle, with Kirk and his other friends beside him, briefly materializes Finnegan on an Academy transporter pad and then sends him back to the simulator -- without the inanimate parts of his transporter pattern. Finnegan reappears in the captain's chair, stark naked. As the other cadets laugh, Decker enters the simulator. Finnegan declares that Kirk must be responsible and vows revenge. "Definitely going to be an interesting few years," Decker says. 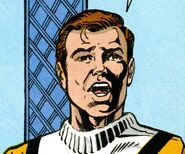 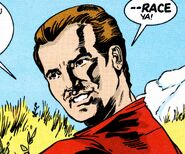 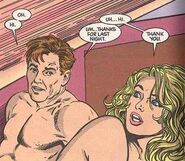 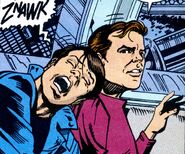 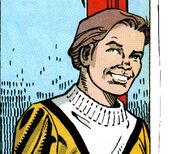 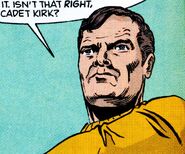 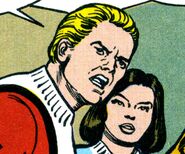 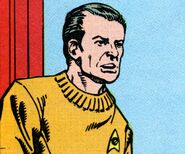 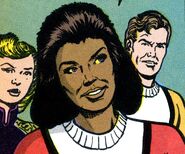 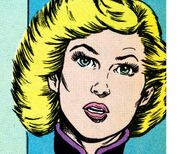 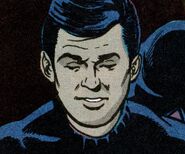 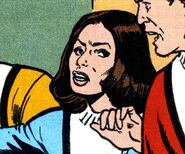 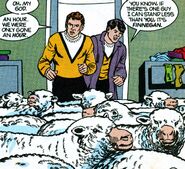 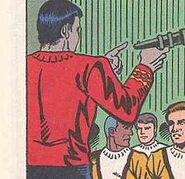 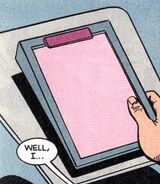 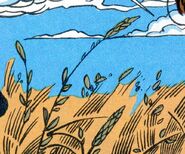