For other uses, see Starfleet Academy.

31 August 1997
Starfleet Academy is a video game released by Interplay in 1997, the first Star Trek 3D starship flight simulator for computers, along with a movie-era-based storyline featuring original characters taught by instructors, including three legendary characters from the classic Star Trek universe.

In this computer game, you are a cadet at Starfleet Academy taking command classes, where you go through simulator training. To pass, you have to accomplish at least 75% of the mission goals. If you don't pass, you are shown what job you will end up with instead. One of the simulator missions is the dreaded Kobayashi Maru, while others are based on the exploits of Kirk's Enterprise. For instance, there is a simulation-recreation of Battle of the Mutara Nebula, that Captain Kirk notes ruefully is used to reinforce the need to take the proper defensive precautions when encountering a non-communicative ship he neglected in the actual incident.

Versions were released for the IBM PC and the Macintosh, and a similar game, Starfleet Academy Starship Bridge Simulator was released on the Super Nintendo Entertainment System in 1994 and Sega Genesis 32X in 1995.

Ship
The player can choose between a Oberth-class, Miranda-class or Constitution-class starship.
Mission objectives

Captain's log
Captain's log, stardate 2957.5. Weapons of war do not recognize truces, cease fires, or peace treaties. They are capable of killing millennia after their wars have been forgotten. Our mission involves these weapons. We must neutralize several dangerous mine fields that are threatening Federation space.

Captain's log
Captain's log, stardate 2980.5. We have been assigned to Huron system to replace faulty probe that monitors a field of artifacts. We expect on uneventful mission.

Captain's log
Captain's log, stardate 4065.4. A long, bloody war with the Klingons is probably the Federation's greatest fear. And, once again, an incursion from the Klingons has brought us to the brink.

Captain's log
Captain's log, stardate 3651.3. We are on a mission to intercept an intruder into Federation space, and, we hope, learn more about the reasons for the Klingon-Romulan invasion.

Patrol the planets Churchill II, Allendon II, Montgomery II and Mountjoy II of the galactic rim to identify raiders in the area.

Captain's log, Stardate 3101.7. A mysterious raider has attacked shipping along the galactic rim. Starfleet has ordered us to patrol the area in the hope that we will be able to uncover the raider's identity and stop them once and for all.

Scenario
The scenario begins at Starbase 11. Upon arrival in the Allendon system the simulated crew will receive a distress call from the freighter Motherlode in the Churchill system. Additionally the Andorian Mining Corporation Autmated refuelling station Allendon 3A24 will offer their service.

"The Barrier (Starfleet Academy)" redirects to here. You may be looking for TNG - The Star Lost comic: "The Barrier".

"Divide and Conquer" redirects to here. You may be looking for TOS - Tests of Courage comic: "Divide... and Conquer".

Cry from the Dark

Captain's Log, Stardate 3262.4. We're enroute to the Heeya system to investigate a strange set of sub-space distress calls. We don't know why so many different races would be in distress in a single system, but I guess that's what we'll find out.

This mission is a simulated battle between a Fleet of Starfleet Vessels and a new Klingon Cruiser codenamed Ber'taa.

Captain's log, Stardate 3610.5. This is only test of our capability against new enemy threat.

This mission is vaguely based on TOS episode, novelization & comic adaptation: The Wrath of Khan. The names of objects, locations and people have been altered.

Captain's Log, Stardate 3806.3. The USS Agincourt is on route to investigate the mysterious silence coming from the Egeus System. Both the Athena Science Station and the Ceti-Prime prison colony have gone off-line for no apparent reason, and hopetully we'll be able to assist In whatever situation we encounter.

This mission is vaguly based on The Ultimate Computer. There the player faces a version of the M-5 computer that was stolen and modified by the Klingons.

Captain's log, Stardate 4990.5. A Klingon fleet has crossed the Neutral Zone and has attacked Federation shipping. Starfleet has ordered the Paris to lead task force to repel this incursion into Federation space.

A World of Their Own

Captain's Log. Stardate 0000.2. My first patrol with my new ship and my old crew has gone very well. We're serving as an advance scout ship for the U.S.S. Truong. We've been patrolling near the Neutral Zone for over a month now, searching near the most recently destroyed Federation colony. Still no sign Of the Meclanti. Despite the gravity of our mission, I can't help feeling slightly… excited.

Star Trek: Starfleet Academy — Chekov's Lost Missions is an add-on expansion for Starfleet Academy (released in 1998) which includes, as the title suggests, seven new missions (with FMV briefings), which were originally intended for inclusion in the final version of the base game; two new multiplayer-missions, an update patch, and other improvements. 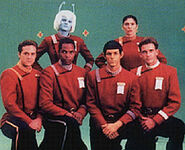 Emblem of the Medusans.

Emblem of the Deltans (23rd century). 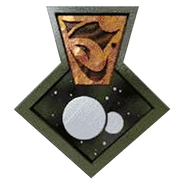 The insignia of the Gorn Hegemony.

A statue of Eris.