November 2008
Starfleet Shipyard was a promotional tie-in website for the 2009 Star Trek movie created by Intel. The site took the guise of the Starfleet shipyard where the USS Enterprise is being constructed. The website included a number of sections promoting the Star Trek film and Intel, and one section providing in-universe information on the USS Kelvin.

The website presented itself as the forward staging platform at the Starfleet shipyard building the Constitution-class USS Enterprise. Via the Starfleet Academy archives additional data could be studied.

The USS Kelvin section of the website comprised of a rotating three-dimensional representation of the Kelvin; certain parts of the ship can be highlighted which give a still image view and a brief summary of information on that section. Additionally the bridge section includes details on some of the crew.

Highlightable sections include: the hangar, which is used for storage of the Kelvin' shuttlecraft as well as supplies for multi-year missions; the impulse engines, which allow the Kelvin to travel at sub-light speeds, with full impulse taking the Kelvin to one-quarter the speed of light. The engines are powered by four deuterium fusion reactors; the nacelle, which houses two rows of warp-field coils and the ship's warp engine, allowing faster-than-light travel; the navigational deflector, which clears the Kelvin's path of dangerous particles and asteroids; phaser turrets, which by passing plasma through phaser emitters discharge nadion particles in pulses or beams; the bridge, from which the ship's functions are coordinated by Captain Richard Robau and crew. 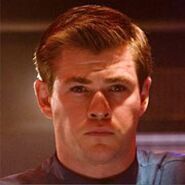 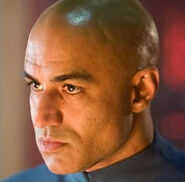 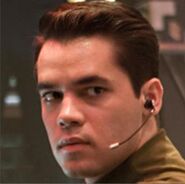 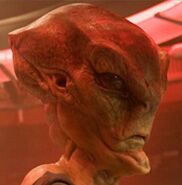