The Starfleet uniform was redesigned and introduced in 2373, with the previous version slowly phased out over a period of years.

The new two-piece uniform was fashioned from a thicker, heavier quality fabric and, like the previous version's jumpsuit variant, was almost all-black. The jacket had quilted heather gray shoulders with the wearer's division or department indicated by a coloured sleeve stripe near the cuff. The under-shirt was also coloured to denote the division, the collar of which protruded from the neck of the jacket and held the rank insignia. (SA comic: "Renegades"; Later episodes of "Star Trek: Deep Space Nine", TNG movies: First Contact, Insurrection, Nemesis, VOY episodes: "Message in a Bottle", "Hope and Fear", "Timeless", "Pathfinder", "Life Line", "Inside Man", "Author, Author", "Friendship One")

Variations of this uniform existed, including a formal double-breasted tunic-style jacket with a division-coloured lining. This jacket could be worn with fitted trousers and calf-length boots, and was in service some time after 2379. (Starfleet Academy SCISEC Briefs episodes)

The flag officer's version of this uniform style was introduced no later than 2374. The tunic-style jacket ended at the hips and could be secured with a belt buckle around the waist. It was decorated with gold piping around the collar and along the front fastening seams. The division-coloured stripe around the cuff was wider than on the standard duty uniform, with a further rank insignia pin attached on each stripe. (DS9 episodes: "Behind the Lines", "Favor the Bold"; TNG movies: Insurrection, Nemesis)

Vice Admiral Kathryn Janeway wearing her flag officer's uniform in 2379.
Add a photo to this gallery 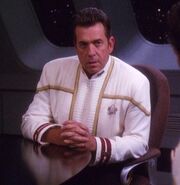 Retrieved from "https://memory-beta.fandom.com/wiki/Starfleet_uniform_(2373-2386)?oldid=610467"
Community content is available under CC-BY-SA unless otherwise noted.