The Starfleet 2399 uniform (SF 2399)[1] was a type of clothing, a 24th century Federation uniform color-coded by department worn by personnel of Starfleet in the 2390s decade. The overall design harkened back to the colorful aesthetics of the previous three decades, becoming a black design with a colored-stripe on the shoulders. (PIC episode: "Remembrance", STO - Awakening mission: "Welcome to Earth Spacedock")

When William T. Riker returned from his retirement on planet Nepenthe and assumed captaincy over the USS Zheng He and its squadron of Inquiry-class battlecruisers, he donned the command division SF 2399 duty uniform. Conversely, the Zhat Vash General Nedar, who had masqueraded as Commodore Oh, Chief of Starfleet Security, dropped her operations division gold uniform in favor of a Tal Shiar uniform. The two leaders faced off in the Standoff at Coppelius. (PIC episode: "Et in Arcadia Ego, Part II")

These two styles were later adapted to the Sierra uniform of the early 2400s. (STO - Klingon War mission: "Welcome to Earth Spacedock")

From 2410, SF 2399 was available for ship personnel to wear at the commanding officer's prerogative. (STO website: Claim the Uniform of Star Trek: Picard!)

When the seventh host of the Tal symbiont reconnected with the symbiont's collective memories in 3189, one of the previous hosts that welcomed Adira Tal into their circle was Captain Tal. He wore the command division version of SF 2399. (DSC episode: "Forget Me Not")

In various alternate timelines, Starfleet instead adopted the All Good Things uniform near the end of the 24th and beginning of the 25th century. The combadge of these timelines resembled its SF 2399 counterpart. (TNG episode: "All Good Things...", DS9 episode: "The Visitor", VOY episode: "Endgame")

In a timeline thrown into chaos by the temporal anomaly crisis in the early 2380s, duplicates of primary universe officers emerged and joined Starfleet's and Q's efforts to resolve the crisis. These included the 2399 versions of William T. Riker, Kirsten Clancy, and "Commodore Oh", who wore their SF 2399 uniforms. Oh added sunglasses to her outfit. (ST video game: Timelines)

The Starfleet 2399 uniform was a two-piece attire, rather than a jumpsuit. The long-sleeved top, undershirt, trousers and boots were a matching black. The shoulder part of the top was colored specific to the department: red for command, yellow for operations (tactical and engineering), and blue for science and medical. The uniform design also resembled the old uniform design that was introduced in 2369. In the 25th century, tactical had switched to red. (STO - Klingon War mission: "Welcome to Earth Spacedock", STO website: Claim the Uniform of Star Trek: Picard!)

In the 2390s, the uniform was worn with the SF 2399 combadge - a golden, hollow Starfleet arrowhead atop two dark grey, vertical bars. (PIC episode: "Remembrance") This combadge was reminiscent of a design in use in different alternate timelines and potential futures. (TNG episode: "All Good Things", VOY episodes: "Timeless", "Endgame", DS9 episode: "The Visitor") While both combadge designs were available for Starfleet officers from 2410 onwards, only the SF 2399, the Lifetime combadge and a plain arrowhead could be worn with the Starfleet 2399 uniform. The combadge colors could be changed within a limited palette of gold, silver, bronze and dark grey. (STO - Season 18: Awakening mission: "Welcome to Earth Spacedock", tailor menu)

The combadge was worn on the left breast, with its top crossing the dividing line between department color and the black main body of the attire. Round, golden rank insignia sat just above that dividing line over the right bosom. In the center of the chest, a small trapezoid of division color angled downward. Admiral rank insignia also consisted of round pins but these sat inside a trapezoid. (STO website: Claim the Uniform of Star Trek: Picard!) In contrast, the 2387 uniform had the trapezoid angle up, and its rank insignia were golden squares instead of round pins. (ST - Countdown comic: "Number One") 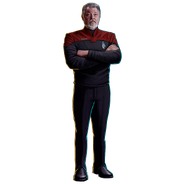 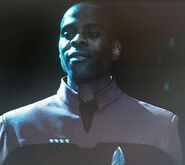 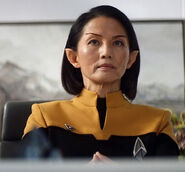 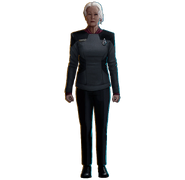