In 2410, Starfleet initiated revision 120.2C to the Starfleet Uniform Code. The 2386-2409 style of uniform was retired and replaced in favor of a new uniform code. Starfleet commanding officers had the option to specify a uniform style of their own for their crews, but unless otherwise specified by said COs all Starfleet personnel were to change to a new style, dubbed "Odyssey".

The divisional colors were retained from the previous style of uniform: Red for command, tactical, and security personnel, turquoise for science and medical, and yellow for engineering and operations. In addition, Starfleet Intelligence personnel wore black, as exemplified by Commander Ethan Burgess and Lieutenant Commander Kyle DeSoto. (STO website: Starfleet Uniform Code 2410; STO missions: "Halting the Gorn Advance", "The Doomsday Device", "The Vault")

The service style was designed to be presentable and comfortable for shipboard and starbase duty, and was considered equivalent to a civilian business suit.

The commanding officer of a starship or installation received a variant of the standard officer uniform with white shoulders instead of gray. Flag officer service uniforms consisted of a longer jacket with metallic braid on the cuffs and divisional color stripe: silver for rear admirals and vice admirals, gold for four-stars and fleet. They also received a belt buckle of the Federation's starfield-and-laurels insignia, likewise silver or gold, and four- and five-star officers' combadges were to be colored gold.

The excursion style was intended to be worn on away missions in rugged terrain or when infantry combat was expected. It could also be used as a work uniform by personnel who expected to get dirty in the course of their job, such as infantry or mechanics.

The style was broadly similar to the service uniform but featured increased padding on all areas, taller boots, and cargo pockets on the thigh and upper arm. The officer version was mostly dark gray with darker shoulders and a divisional color stripe. The enlisted version had colored shoulders instead. The cadet version had dark blue shoulders and boots and light blue everywhere else. Starfleet Medical combat medics exchanged the bright white of the service uniform for light gray. (STO website: Starfleet Uniform Code 2410)

The excursion style was originally called "tactical" prior to it's release but has since then been renamed in-game. It is essentially equivalent to the working uniforms worn by United States Navy personnel in real life.

The officer variant featured a shoulder strap similar to the 2278-2350s style, with white shoulders, light gray from the chest down, with gilt braid on all seams and divisional colors in a stripe up the pants leg, in a stripe across the upper chest, and on the cuffs and shoulder strap. Enlisted dress uniforms were simpler, with gilt seams, a long jacket, divisional colors on the shoulders and up the leg, and light gray from the chest down. Cadets wore black shoulders and white from the chest down. Officers and cadets wore light gray boots, while enlisted personnel wore black. (STO website: Starfleet Uniform Code 2410) 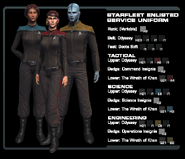 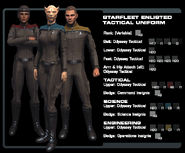 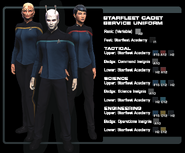 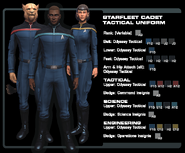 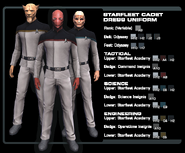 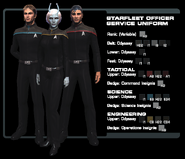 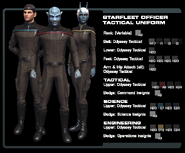 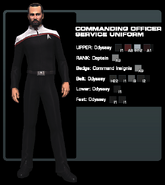 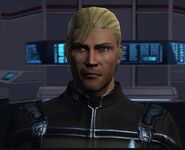 The uniform code specified in this article is based upon a PDF sent out by Cryptic Studios member Thomas "ThomasTheCat" Marrone following the Season 9.5 update for Star Trek Online, available at File:Starfleet Uniform Code 2410 web.pdf. Prior to this Cryptic had been progressively updating all Starfleet non-player characters to use a version of this uniform beginning with the Season 9 redesign of Earth Spacedock.

The unique white shoulder of the Commanding Officer service uniform resembles the unique white beret worn by starship commanders in the Honor Harrington universe, on which Thomas Marrone worked as part of BuNine Consulting, LLC prior to working for Cryptic.

The same information, as well as data on the Klingon Defense Force Bortasqu' uniform, was also posted to Cryptic's STO blog.