This Starfleet uniform was a 32nd century Federation military outfit, a uniform adopted by Starfleet at some point before the year 3189. It consisted mainly of a light gray two-piece suit with a narrow color stripe denoting department. (DSC episode: "Die Trying")

The 25th century Khitomer Alliance, an international body including the Federation, was heavily involved in the Temporal Cold War. (STO - Yesterday's War mission: "The Once and Future Agent")

Through the Lobi Crystal Consortium, Federation Starfleet acquired the uniform, codenamed Starfleet 3189, and made it available for its personnel in 2411. (STO website: Explore Far from Home!)

The personnel of the 31st century Ouroboros-class temporal raiders participating in the Battle of Procyon V on behalf of the Temporal Accordists wore the Wells uniform[1] that had been in use since the 27th century[2]. (STO - Future Proof mission: "Battle of Procyon V", ST performance: Star Trek Live)

By the time the Kelpien and Ba'ul Alliance of Kaminar were inducted into the Federation[3] Starfleet had switched to an unrelated uniform style, with a gray base color and a different cut that abandoned the yoke-division. Lieutenant Tal, one of the first four Trill hosts of the Tal symbiont wore this outfit.

The Kelpiens and Ba'ul joined at some point before the the Burn cataclysm wrecked the galaxy in the year 3069[4] The uniform at the ceremony resembled a cadet uniform from the mid-2260s decade.[5] (DSC episodes: "Forget Me Not", "Su'Kal")

In this version, a pair of trapezoids was attached to the front of the collar. A narrow stripe down the right side of the torso indicated department affiliation. Chevrons on the tricom badge signified rank. (DSC episode: "Forget Me Not")

Captains[6] and flag officers[7] wore a different style of badge that did not indicate rank. The uniforms of the captains attending Kaminar's induction ceremony matched that of the 2260s-era cadets, with a grey body and red shoulders and collar. In the 3180s, Admiral Senna Tal wore a grey outfit with shoulder flaps reaching down the front of the torso, a thin red trim, and shoulder epaulets with six chevrons indicating seniority. (DSC episodes: "Forget Me Not", "Su'Kal")

By the year 3189, the style had been modified. Fleet Admiral Charles Vance's uniform echoed Senna Tal's style but had different details. All staff wore the rank-indicating tricom badge. Crew wore a grey-two piece with matching boots. The department-color stripe was wider. Tactical/security personnel lacked the department stripe and instead wore a black, faceted shoulder piece over their uniform jacket. The shoulder piece was large enough that the badge was placed on it. Instead of trapezoids, a large one-piece plate was affixed to the front of the collar. (DSC episode: "Die Trying")

While security and tactical staff wore black[4], the remaining crew department colors were red for command division, yellow for operations division, blue for science division, and white for medical division. (DSC episodes: "Die Trying", "That Hope Is You, Part 2")

Kovich was dressed in a formal suit instead of a regular uniform. The chevrons on his tricom badge showed the rank of commodore. Holographic staff at Federation Headquarters included security staff and medical officers. Eli wore a white, formal suite with tricom badge. Other officers used for interrogation wore grey jumpsuits. (DSC episode: "Die Trying")

When the time-displaced Crossfield-class science vessel USS Discovery arrived from the year 2258, its crew retained its 2250s-era uniforms.

When Commander Nhan assumed command of the seed vault ship USS Tikhov-M, it became the second ship in the fleet with the Discovery-era outfit. (DSC episode: "Die Trying")

Following the defeat of Minister Osyraa in a battle between Emerald Chain and Federation Headquarters, the Discovery-A crew adopted the Type B style. (DSC episode: "That Hope Is You, Part 2")

This left the Tikhov-M staff as the only personnel in the 2250s-era uniform and without tricom badge. (DSC episode: "Die Trying")

Rank was indicated by the number and color of chevrons on the tricom badge. (DSC episode: "Scavengers") 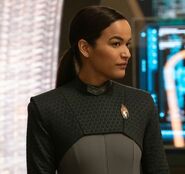 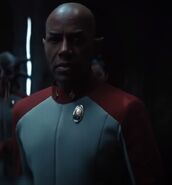 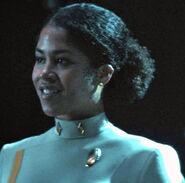 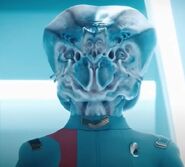 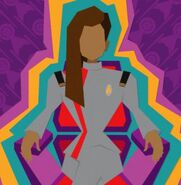