This type of 24th century Starfleet uniform was a type of clothing, a color-coded uniform worn by personnel of Federation Starfleet in the early 2380s decade. The overall design harkened back to the colorful aesthetics of the previous two decades. (STO - House Divided mission: "Free Lower Decks Duty Officers!", LD episode: "Second Contact")

By the year 2379, the Starfleet uniform in use was overall black, with grey shoulders, and department colors indicated by cuff stripes and the undershirt. (TNG movie: Star Trek Nemesis)

By stardate 57436.2, in 2380, at least a section of Starfleet had switched to a more colorful, vibrant uniform. The three department colors were command red, science blue and operations yellow. (LD episode: "Second Contact")

In 2411, this uniform was sold to the Khitomer Alliance by the Lobi Crystal Consortium for use by Starfleet personnel. (STO - House United mission: "Welcome to Earth Spacedock") 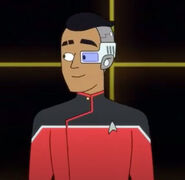 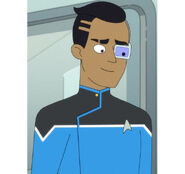 The Starfleet 2380 uniform was a two-piece attire, rather than a jumpsuit. The shoulder part of the long-sleeved top and trousers were a matching black. The torso, the zipper from the yoke to the collar, and the top of the color, were clad in the department color. A white strip separated black shoulders from department-colored torso. Along this line, a silver, unadorned combadge was placed on the left of the breast.

The boots were a darker black than the rest of the uniform. The soles and the boot's top end showed the department color in a shade matching the shirt. For medical staff, the boots were white.

The top could be opened, with the aforementioned zipper running down the front from collar to beltline.

Undergarments consisted of shorts for males, and bras with matching slip for female officers. Undergarments were white.

Rank was indicated by golden and hollow golden pips, as in the preceding uniform style. (LD episode: "Second Contact")

While the insignia of admiral ranks matched the style of the preceding Starfleet uniform, only one set of admiral bars was worn on the uniform collar instead of two.

The white strip separating department color from shoulders was gold, as were two epaulette-style squares on each shoulder.

This type of uniform was worn by four star admiral Mariner in 2380. (LD episode: "Second Contact")

The dress uniform matched the regular duty uniform in style, except the shirt was longer, like a long coat or jacket. (LD episode: "Envoys")

Sikh officers could wear the uniform with a turban matching their department color.

Benzite officers relying on rebreathers could have a metallic grey respirator attached to the front of their shirt. (LD episode: "Second Contact")

The sleeves could be rolled up on duty.[1] The inside department color was of a lighter shade than the outside. They had to be rolled down when ordered by a superior officer.[2] (LD episodes: "Second Contact", "Temporal Edict")

As with previous uniform iterations, senior medical staff could wear a lab overcoat.

Headbands were allowed and held in the department color. Captain Carol Freeman of the USS Cerritos tied her down with a red headband. (LD episode: "Second Contact") 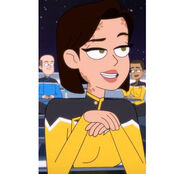 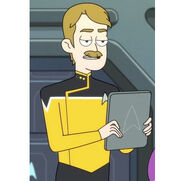 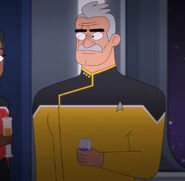 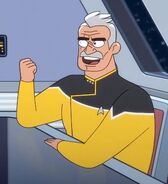 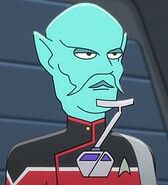 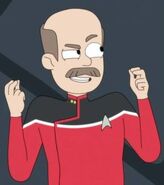 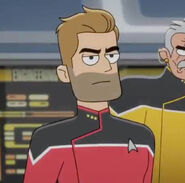 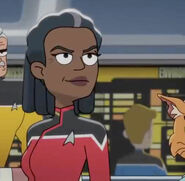 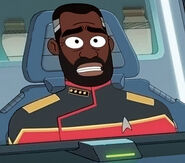 Officers in clean, disheveled, and out of uniform