Authorized by the Perimeter Defense Directive in the 2360s decade, the Steamrunner-class vessels were designed for patrolling the Federation borders, responding to border incursions, and for intelligence gathering.

Steamrunner-class vessels crewed 200 officers and crewmembers, with room for up to 50 passengers or an additional 550 evacuees. The vessels measured 375 meters in length and had 18 decks, with a width of 270.9 meters and a height of 79.5 meters. The Steamrunners had four standard personnel transporters, four emergency transporter stages and four cargo transporters.

The Steamrunner warp engines were rated to cruise at warp six, with a maximum speed of warp 9.2 and maximum drive of warp 9.7. The Steamrunner impulse engines were capable of between .75 to .95 the speed of light at upper limit. The Steamrunner weapons had a full 720-degree firing arc of type X phaser emitters, and two torpedo launchers with forward, and aft firing arcs and a normal loadout of 250 photon torpedoes. Steamrunner ships were defended by deflector shields and ablative armor. (Last Unicorn RPG module: The Price of Freedom; Decipher RPG module: Starfleet Operations Manual)

The Zephyr-subclass is a heavy escort design that was a 25th century variant of the Steamrunner layout. (ST video game: Star Trek Online) 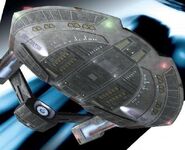 Ventral view of the USS Appalachia

Aft view of the USS Ballista