"Steel and Karma" is a Star Trek Online short story published on the ARC website on 03 May 2016. The short story was written by Cryptic Studios Staff Content Designer Ryon Levitt. The title image is a drawing in the style of ancient Japanese paintings, and includes writing in the Japanese language. The short story was posted by Developer "LaughingTrendy". "Steel and Karma" is an entry in the Star Trek Online series Agents of Yesterday, which ties into the Temporal Cold War story arc of Star Trek: Enterprise.

In 17th century Japan, Samurai Sūrū Yoshitaro, in the employ of Lord Uesugi, and his fellow warriors Naoe Kanemasa and Maeda Takamaru have travelled to Yonezawa. The locals petitioned Lord Uesugi to help them with a magical Oni creature. At first, Yoshitaro does not take the villagers superstitions seriously, until they encounter, and fight, the supposed Oni.

Yoshitaro defeats the creature who, unbeknownst to him, is a Na'kuhl temporal operative from the 29th century.

Uptime, Professor Maureana Barkley discusses the historical record indicating this event with Captain Benjamin Walker of the USS Pastak. They surmise that the Na'kuhl are targeting the Sulu family, whose members have served in Starfleet in roles critical to the Federation and the integrity of the timeline. Barkley and Walker commit to investigating this further. 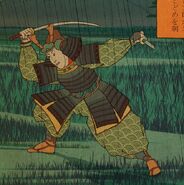