46258.2 - 46258.7
"Stowaway, Part II" was the second issue of Malibu Comics' 1993 series of DS9 comics, released in September 1993. The issue consisted of 24 pages of story, written by Mike W. Barr and edited by Tom Mason. The art was penciled by Gordon Purcell and inked by Terry Pallot, with Kara Lamb credited as assistant editor. While the Cardassian mold continues to threaten Deep Space 9, Dukat's starships also pose a threat to the space station.

Gul Dukat offers to destroy the genetically altered mold, but Benjamin Sisko declines, realizing that the Cardassians know no more about the mold than they do. When Dukat withdraws, Sisko returns to the concerns of what activated the mold and confronts Captain Johnson of the Armstrong, which is still docked at the station. Johnson still denies the artifacts are responsible and refuses to allow anyone from DS9 to board the Armstrong to talk to Doctor Josiah Wembley. Sisko comments that he is tired of how evasive Johnson and Wembley have been and contacts Odo, whose security office has just been overrun. Odo transforms into a bird and escapes the office, carrying his bucket in his talons.

Jadzia transports to the Armstrong. On DS9, Jake is about to reveal to his father that he and Nog released the mold, but collapses in Sisko's office. O'Brien realizes that the mold is in the air supply and need to repair it, with only six hours to do so before the oxygen is gone. Bashir suggests that the sterile field he uses for surgery could purify the air and give them more time.

On the Armstrong, Jadzia reaches Dr. Wembley's quarters but finds them empty. In a safe, she finds the artifacts and a recording of Wembley when Sisko talked to him. The nridge crew detect her, but Odo, disguised as her backpack, is able to incapacitate the security team. They force Johnson to tell them the truth and he does: Dr. Wembley is dead. Wembley died just after the Armstrong entered the Gamma Quadrant, but Johnson wanted to give him credit for their later discovery. Sisko was not speaking to Wembley at all, just an enhanced recording messages. Odo criticizes Johnson for telling them the truth at the outset. Odo and Dax return to DS9.

On the station, O'Brien has an activated the sterile field in Keiko's schoolroom to purify the air. Unfortunately, the purified oxygen causes dormant mold in the room's carpet to expand quickly. O'Brien realizes that the field may do more harm than good. The attempt was not futile, as Jadzia determines that the mold was probably brought there by a child. Keiko gathers her pupils to ask them and Jake admits that he and Nog were responsible.

Dax finally determines what happened. When Jake and Nog spilled the chemicals in her lab, a mixture rich in oxygen was crested and activated the mold. Working with Bashir, Dax creates another mixture derived from the mold's own noxious gas, limiting its growth and allowing the crew to gather it up to be incinerated.

Dukat contacts the station and is surprised to find anyone still alive. Sisko thanks Dukat for his "help". Both Jake and Nog's fathers tell them both to stay away from each other. 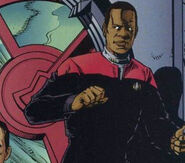