The Next Generation No. 5

2365
Strike Zone was the 5th novel of the Pocket Books numbered series of Star Trek: The Next Generation books, written by Peter David and released in March 1989.

Deep in the uncharted regions of our galaxy, the Kreel, a primitive, warlike race have stumbled upon weapons powerful beyond their wildest imagination. The Kreel have used those weapons to attack their most bitter enemies, the Klingons.

Captain Jean-Luc Picard and the crew of the USS Enterprise are called in to mediate the dispute by ferrying diplomatic teams from the two warring races to the source of their conflict, the mysterious planet where the weapons were discovered in an attempt to find a peaceful solution to the conflict, and discover the origins of the super-powerful weapons.

A Kreel survey team lands on DQN 1196, a planet in a zone disputed by the Kreel and the Klingons. They discover a hidden cavern filled with advanced technology and weaponry, but their carelessness costs the lives of half the team, including leader Budian. The crew of the IKS Kothulu observes the despised Kreel from orbit and sends their own landing party, and the two groups quickly engage each other. The remaining Kreel gain access to a massive gun and shoot the battlecruiser out of orbit. The Kreel and their reinforcements hole up on DQN 1196, claiming and studying the weapons, though their ineptitude ultimately gets that team killed as well. Both powers find themselves on the verge of war, and the Kreel even begin attacking Starfleet ships in their greed for more power and technology, so Federation representative Taka Nagai maneuvers them into peace talks.

Jaan Baat-Utuul-Beyn-Devin, a Selelvian student, learns that he suffers from the Rot, a rare genetic condition with no cure. Unable to deal with his death sentence, he inadvertently turns his species' powers of coercion (the Knack) on his friend, Wesley Crusher, pushing the young genius to develop a cure. When Jaan realizes his accident, he feels bad, but does nothing to release Wes. The other young man, who was already chaffing at the expectations he perceives everyone putting on him, runs himself ragged.

The Enterprise transports the Klingon and Kreel ambassadorial parties to DQN for negotiations. The Klingons are led by the diminutive and uncommon Honorable Kobry, who has some human ancestry and was educated in the Federation. The Kreel are led by Aneel, the highest ranking survivor from the first survey. The two parties (again) immediately come to blows upon their first encounter, but Kobry eventually gets Aneel to agree to a cease-fire and an uneasy peace is reached. However, Aneel secretly works with Jaan to procure weapons, promising the boy a miracle cure. Worf and Gava, Kobry's aide and daughter, enjoy a brief romance.

Riker, Data, and Geordi transport to the surface of DQN 1196 to investigate the weapons cache but find the site deserted of Kreel. Meanwhile, at a reception in Ten-Forward (organized by Guinan to everyone's delight), Kobry is poisoned and apparently dies. The Klingons, now led by Tron, use Kobry's murder as a spark to attack the Kreel, and both parties get into a massive deadly brawl that quickly spreads across the whole ship. Aneel's people uses their stolen phasers and their increasing hold over Jaan to seize the bridge and main engineering. Aneel kills Jaan once the young man has served his purpose, claiming that he delivered on his promise of a cure. However, Wesley's sense of duty during the emergency breaks him out of his Knack-inspired haze enough that he regains control over the ship's transporters. After a final decisive fight between Aneel and Worf, in which the Kreel loses his head, Wes uses the transporter to capture and confine all of the warring Klingons and Kreel. Tron is revealed as Kobry's true assassin, and the Honorable Kobry actually survives thanks to his practice of inoculating himself against poisons. Tron is stripped of his honor and his name.

On the surface, La Forge narrowly survives the site's booby traps and makes contact with an advanced intelligence, a representative of the omnipotent Cognoscente. They reveal themselves to the Enterprise crew, informing the lesser beings that the world, its weapons, and the entire Klingon-Kreel conflict were part of a test to see how humanity would respond. Outraged at yet another advanced species testing humanity at the cost of numerous lives, Picard tells off the Cognoscente. They depart, allowing the Starfleet crew a brief glimpse of humanity's own spectacular evolution, still out of reach for the time being. With the weapons and the disputed planet gone, the burgeoning war is over, but Kobry still vows to hear the Kreel's legitimate complaints against the Empire. Wes recovers from both Jaan's pushing and his death, breaking down in front of Picard about his need to know everything and ability to solve every problem—things he thinks would have saved his father's life. Picard offers comfort and Wesley comes to realize the true expectations that others have of him.

This novel was written with knowledge of the changes introduced at the beginning of the second season, but before those episodes premiered. It also predicts Worf's romance with a Klingon female who has a human ancestor (though with Gava instead of K'Ehleyr) before "The Emissary", as well as the Klingon ritual of 'discommendation' well before the third season episode "Sins of the Father".

Peter David has the android Data consistently using contractions in his speech, which the shows established as being something he had not yet 'mastered'. As "Datalore" had already aired, in which Lore points out this speech pattern, this qualifies as a (relatively minor) mistake on the author's part. However, this aspect of the character was portrayed inconsistently throughout the first season with Data often using contractions, including at the end of "Datalore" ("I'm fine").

Picard tells Data to 'shut up' more than once in this novel, and in Star Trek: Nemesis (about 14 years later) he claims to have waited 15 years to say that to Data. 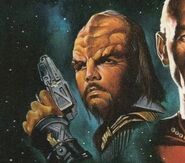 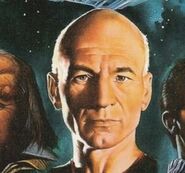