2257 (2247, flashback)
"Succession, Issue 2" is a comic in IDW Publishing's Star Trek: Discovery series, the second of four issues in the Succession miniseries.

After the Emperor was killed when the rebels destroyed the Imperial Flagship Charon, Lord Alexander has claimed the throne.
The rebels believe the time is right for an even bolder strike on this untested emperor - an attack on Earth itself! But what they don't know is that Alexander has been secretly developing a toxin that will kill all non-human life in the galaxy - and it's finally ready to be released.
Meanwhile, Burnham, long thought dead by the empire, has just resurfaced in a refugee camp on Risa...

Emperor of the Terran Empire 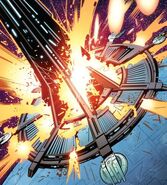