In the mirror universe, the heroic characters you thought you knew care only about power and glory. In this, the final issue of Succession see Michael Burnham in the fight of her life!

In the Mirror Universe, the Terran Michael Burnham was thought to have perished at the hands of the traitor Gabriel Lorca. The arrival of the U.S.S. Discovery in the Mirror Universe began a chain of events that culminated in the destruction of the Terran Imperial flagship. Emperor Philippa Georgiou was presumed dead. Her cousin, Alexander, siezed the throne. But Michael Burnham, Georgiou's heir, is alive. And she is coming for her birthright.

Captain's log, supplemental.
I swear that sometimes news travels faster than light. And the news from the Imperial capital is certainly unexpected. Our mission remains the same, no matter who's sitting on the throne. But in the space of a few weeks, we've seen four different emperors. This new one certainly sounds capable. As my first officer is fond of saying... Fascinating.

Emperor of the Terran Empire 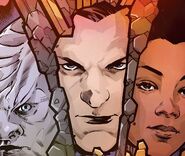 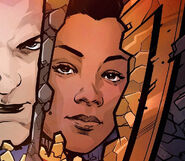