You are alone in the dark reaches of space, surrounded by aliens who do not understand who you are and what you are, and who will not accept your beliefs. Under such circumstances, an emotional human would feel lost, cut off, adrift, but Sub-Commander T'Pol is a Vulcan, and Vulcans control their emotions. However, no other Vulcan has served for longer than a few weeks on a human ship. Has she, as others imply, lost her way?

Pulled, once again, into one of Captain Archer's dangerously impulsive attempts to make first contact, the Sub-Commander finds her life threatened. T'Pol reacts, draws her phase pistol and kills. It was a simple act of self-defense. But is killing ever simple? Has she forsaken the teachings of Surak?

Determined to be true to her heritage, T'Pol forswears violence. She tells Captain Archer that never again will she kill -- even if ordered. Is she, as Archer suggests, endangering the entire ship?

Captain's Starlog, Supplemental. While mapping an area of uncharted space, we have encountered a populated planet -- which is sending out a beacon that our Universal Translator has garbled. Communications Officer Ensign Hoshi Sato is currently trying to decipher what she can.

On the anniversary of Henry Archer's death, Sato picks up a distress call from the planet Oan. Jonathan Archer, T'Pol, Sato, Doctor Phlox and Malcolm Reed descend to one of the planet's islands in a shuttlepod, only to discover very few inhabitants still alive. In a medical facility they find a dead Oan physician slumped over the body of an Oan woman who is barely alive; the male physician's face is contorted with outrage. Leaving Phlox with the female Oan, the others search for the only other survivor on the island, who attacks Sato. T'Pol fires her phase pistol, set on stun, at the Oan, who is killed by the stun blast due to his weakened state. 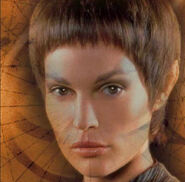