The Next Generation (Pocket TNG) No. 4

2364
Survivors was the fourth novel in Pocket Books's numbered series of The Next Generation novels, written by Jean Lorrah.

Treva—a Human colony on the fringes of known space. Isolated from the rest of the galaxy, at last a report they were on the verge of becoming a true interstellar community—a full fledged member of the Federation. But now the USS Enterprise has received a distress signal. Treva is in the throes of a violent revolution, a revolution led by a merciless warlord who has committed countless atrocities in the name of freedom.

Data and Lieutenant Tasha Yar are dispatched to investigate. But once they reach Treva, they discover the truth—and any possible solution—may be far more complex than a simple rebellion. For Treva's president wants more than Starfleet's good words in her fight against the rebels.

She wants their weapons. And before the battle is over, she means to get them. Over Data and Yar's dead bodies, if necessary.

The Enterprise receives a call from Nalavia, the president of Treva, requesting Federation assistance in quelling a rebellion led by the warlords who were deposed when the planet adopted democracy. Since the ship is on a vital supply mission, Data and Yar are sent in a shuttlecraft to investigate the situation. They view public broadcasts about atrocities committed by rebels but find suspicious details that lead them to suspect the reports are not entirely accurate.

After their initial meeting with Nalavia, Yar is abducted by the followers of her opponent, the warlord Rikan. He explains that after Nalavia was elected, she began suspending civil liberties and ultimately used the supposed crisis to suspend elections. Yar is shocked to find the mercenaries assisting him are led by Darryl Adin, the former Starfleet officer who rescued her from New Paris and later became her lover and fiance, only to flee custody after being convicted of assisting the Orions with a raid on the USS Starbound that cost a dozen lives.

Data joins the group after accessing computer records and confirming that it is Navalia's troops that are responsible for the atrocities, posing as rebels, and also that she is keeping the city population drugged and submissive. A plan is made to neutralise the drugs but Rikan's castle is attacked by Navalia's forces and Data and Yar help fight them off and join an attack on Navalia's capital which coincides with a revolt by the now drug-free populace.

The Enterprise arrives and further investigation shows Navalia is actually an undercover Orion. Both she and Adin are taken into Federation custody but Data manages to expose the fact that the Orions altered the computer records to frame Adin. He is released and Yar makes plans to join him once her tour of duty is complete. However, after her death at the hands of Armus, Data takes on the task of delivering a message from her to Adin back on Treva. 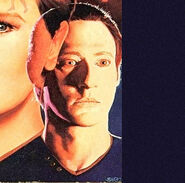