For other uses, see T'Pol.
This character is a member of the Tucker family.
"She does kind of grow on you."
—Charles Tucker III, 2153[src]

Captain T'Pol was a noted Starfleet officer in the 22nd century; the first Vulcan to serve aboard an Earth ship for any substantial amount of time, and was a member of Jonathan Archer's senior crew on the Enterprise (NX-01). By 2162 she had been promoted to the rank of captain and was serving as commanding officer of the USS Endeavour.

When T'Pol was five years old, a ch'kariya killed her father's prized kal'ta plant. She trapped the animal, intending to release it the next day, but did not give it enough food and it died that night. The incident served as a reminder to T'Pol to avoid causing harm to other living things. (ENT novel: Surak's Soul)

When T'Pol was ten years old, she and her fellow students attended a lecture given by Vulcan master Sklar, during which he questioned her if it was right for one to use violent means to defend one's self from violence. (ENT novel: Surak's Soul)

In the 2130s, T'Pol was undergoing secret security training and graduated in 2135. One of her first missions was to retrieve seven Ageron agents; after successfully retrieving six of the agents, one of the men named Menos managed to escape. On Risa, T'Pol killed a man named Jossen. As a result of thinking she had murdered an innocent man, T'Pol returned to Vulcan and resigned her position, and eventually went to P'Jem to seek guidance. On P'Jem, T'Pol underwent the obsolete Fullara ritual which suppressed the memory and emotions of the event. (ENT episode: "The Seventh")

Another mission T'Pol undertook as a V'Shar agent was also in 2135, to the Vulcan outpost settlement on Trilan. There, she and a team of five others pursued a group of Fri'slen, cannibalistic humanoids carrying a blood-borne mutagen who were terrorizing the outpost. The squad was led by Denak, and also included Eskren, Vekk'r, Ych'a and Yekda. Only T'Pol, Denak and Ych'a survived this mission. (ENT novel: Kobayashi Maru)

She was assigned to the Vulcan science ship DFC Seleya where she served as the deputy science officer under Captain Voris in 2148. After a year of serving aboard the ship, she was transferred to the diplomatic branch. (ENT episode: "Impulse")

In April 2151, when Captain Jonathan Archer and the Enterprise (NX-01) set out to return Klaang to Qo'noS, T'Pol was assigned to the Enterprise as an observer. T'Pol proved essential in the mission, as her knowledge and Vulcan star charts allowed the Enterprise to complete her mission. Captain Archer requested she remain aboard as science officer and first officer. (ENT novelization: Broken Bow)

When P'Jem was destroyed by the Andorians later in 2151, T'Pol was recalled from the Enterprise by the Vulcan High Command; she went on a last mission to Coridan III with Captain Archer in a shuttlepod. The shuttlepod was shot down and captured by a rebel faction, but they were rescued by the Andorians. Following this event, T'Pol's transfer was revoked. (ENT episode: "Shadows of P'Jem")

A few weeks later, while the Enterprise was exploring the Arachnid Nebula, the starship encountered the Vulcan ship Vahklas. On board was a group of V'tosh ka'tur (Vulcans without logic), led by Captain Tavin. Although initially wary, Subcommander T'Pol eventually showed some curiosity about their unorthodox philosophy and agreed to a mind meld with Tavin's first officer, Tolaris. However, when she asked him to stop the meld, he refused and she had to use force to escape. It was later revealed that T'Pol contracted Pa'nar Syndrome during the meld. (ENT episodes: "Fusion", "Stigma")

In 2152, T'Pol's memories of her mission to apprehend the Ageron fugitives were reawakened, and she set out to capture Menos. With Captain Archer's help, she succeeded in doing so. (ENT episode: "The Seventh")

Later the same year, her time aboard an Earth ship left her with a "Human accent," according to Ambassador Soval. (ENT episode: "Cease Fire")

When the Xindi attacked Earth in 2153, Enterprise was recalled to Earth by Admiral Maxwell Forrest. Captain Archer persuaded Forrest to go after the Xindi, but the Vulcans did not want T'Pol to go on the mission. T'Pol resigned her commission and boarded the Enterprise as it headed to the Delphic Expanse. (ENT novelization: The Expanse)

While in the Expanse, Enterprise received a distress call from the Vulcan ship DFC Seleya. On boarding the Selaya, they found that the crew of 140 had been driven insane as a result of poisoning with Trellium-D, which was a neural toxin for Vulcans. T'Pol was also affected by the poisoning, but was treated and recovered. (ENT episode: "Impulse")

After becoming addicted to Trellium-D, T'Pol and Commander Charles Tucker III had a sexual encounter in late 2153. (ENT episode: "Harbinger")

The year 2154 saw T'Pol accept a Starfleet commission at the rank of Commander, after Enterprise returned from her mission into the Delphic Expanse. (ST website: StarTrek.com)

In 2155, during the Earth-Romulan War, Captain Archer sent T'Pol home to Vulcan, in order to convince T'Pau to bring Vulcan fully into the war. T'Pol was unsuccessful in convincing T'Pau, but she did begin an investigation into Kuvak's secretive arms shipments. T'Pol returned to the Enterprise before she could finish the investigation, so she left it in the hands of Charles Tucker III, Ych'a, Denak, and Terix. (ENT - The Romulan War novel: Beneath the Raptor's Wing)

Just after the formation of the United Federation of Planets in 2161, T'Pol was promoted to the rank of captain and was placed in command of the USS Endeavour. In the following years she worked closely with Admiral Archer, who selected Endeavour as his personal flagship. For instance, in September of 2162, they traveled togeaher to Kemsar Colony, a Tandaran colony world that was raided by members of the Raldul alignment posing as Sulibans. After a brief fight, the Starfleet crew was able deal with the Malurian attackers, and recover the abducted Tandaran children.

In April 2163, she played a crucial role in the "Mute" crisis. She insisted on coming up with a peaceful solution, rather than starting another war. Finally, she convinced Admiral Shran, who approved her plan. T'Pol and Lieutenant Commander Sato surrendered themselves to the "Mutes," in order to communicate with them and convince them to stop their attacks. With the help of mind melds, she completed the task and forged a cease-fire with the Vertians. (ENT - Rise of the Federation novel: A Choice of Futures)

By 2186, aged 98, she left Starfleet service and became an ambassador for the Federation. She lived in her family's house on Vulcan with Tucker and their two children T'Mir and Lorian. (ENT novel: To Brave the Storm)

T'Pol on a Strange New World, the future Archer IV. 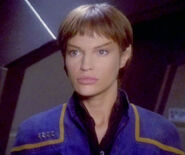 T'Pol, the Captain of the Enterprise in an alternate timeline.