The Original Series (US Comic Strips) No. 15

9546.3-9734.2
Taking Shape is a Star Trek: The Original Series comic strip. It is the 15th story in the US Comic Strips series, published in newspapers over a period of 15 weeks by the Los Angeles Times Syndicate. The story depicts events from Captain Kirk's second five-year mission aboard the refurbished USS Enterprise (NCC-1701). In this story, aliens duplicate the crew in order to take over the ship.

Captain's Log: Stardate 9546.3.
In orbit over Federation Member planet Manark V… I have accompanied Mr. Spock and a biologist, Lt. T'Yee, on an urgent mission to the surface.

Vulcan Lt. T'Yee was hit by a mace and thrown off a landing platform by a Manarkite, who Spock stunned. T'Yee said she was unharmed as she climbed back up. The Manarkite Ambassador apologized for the attack, saying the other was a “radical opposed to this planet's membership in the Federation.” They beamed up with six crates of medicine.

Captain's Log: Supplemental.
We are proceeding as ordered to the Vanowen colony, which is now plagued by Rigellian fever.

Captain's Log: Stardate 9552.8.
We are on course for the Vanowen colony to deliver much-needed medical supplies. I am concerned that there is some uncertainty about our medical personnel's reliability… as their performance at maximum efficiency will be crucial to the success of this mission.
Captain's Log: Supplemental.
Dr. McCoy's erratic behavior has aroused Mr. Spock's suspicions. My first officer is convinced this McCoy is an imposter…
First Officer's Log.
In order to conduct my examination of the entity claiming to be Dr. McCoy… it has been necessary to immobilize it with a Vulcan nerve pinch.

A medical scan by Spock showed that McCoy's brain resembled “no known patterns in humanoids.”

First Officer's Log.
I have returned the McCoy-imposter to consciousness… and used the Vulcan mind-touch to erase its memory of my having forcibly subjected it to scientific study.
Captain's Log: Stardate 9574.6.
Enterprise now experiencing severe turbulence due to ion storm…
Captain's Log: Supplemental.
On course through an ion storm to deliver much needed medical supplies to a Federation colony…
Captain's Log: Supplemental.
Enterprise has been surrounded by Romulan vessels—and the Romulans don't take captives…

Amid the ion storm, three Romulan cruisers of Klingon design surrounded and fired on the Enterprise. Spock discovered that the navigational sensors had been “incapacitated,” perhaps by the Romulans, so as to maneuver the Enterprise within the Neutral Zone where Romulans had a legal right to destroy the ship.

Captain's Log: Stardate 9574.7.
Navigational computer malfunction has resulted in an incursion on the Neutral Zone — and an attack by Romulan warships. However…

Inexplicably the Romulans retreated, leaving the Enterprise without warp power.

Captain's Log: Stardate 95748.8.
The Enterprise has been disabled while carrying medical supplies to the Vanowen colony…

Starfleet ordered the USS Potemkin to meet them at 0900 hours, so Potemkin could deliver the medicine while Enterprise underwent repairs at Starbase 10.

About a third of the crew had been duplicated, including Scotty. T'Yee distracted Kirk, by embracing him at dinner, so the duplicate Scotty could hide Manarkite activity from library computer records. But they hadn't distracted Spock, who placed Scotty under arrest and disabled the computer rather than let the duplicates tamper with it.

Unfortunately the medical crates were found to be empty. Scanning the creates, Spock theorized that undetected “microscopic alien embryos” had been hidden in the crates, which ate their way out of the crates, matured in the medical lab's computer, and their offspring shape-changed into crew duplicates.

Captain's Log, Stardate 9579.5.
The shape-changing aliens who'd attempted to commandeer the ship have stolen phasers from the weapons-store…

Three of the aliens attacked Kirk, Spock and Chekov. When stunned, one reverted to the shape of a Manarkite. Spock noted that Manarkites were not known to be shape-changers. Back on the bridge, Kirk discovered the ship had been diverted to Murakami IX and the aliens had all beamed down. Yet scans of the ship still showed a full crew complement, meaning the original crew was still alive.

Captain's Log, Stardate 9579.6.
On Muakami IX, Lt. Chekov and I have entered the labyrinthine caves to find the Manarkites…

The cavern floor gave way suddenly below Chekov, sending him to another level in the caves.

Captain's Log: Supplemental.
Chekov has been lost in the caverns of Murakami IX…

Spock found Scotty locked in his cabin. They discovered the Enterprise's engines shut down and their orbit decaying. Spock and Scott raced to find the missing crew and get the engines online.

On the surface, T'Yee confronted Kirk and telepathically “clouded his mind” to distract him from a second Manarkite approaching from behind. But at the last second, Chekov arrived and yelled, Kirk aimed a phaser at the Manarkite. T'Yee jumped in the path of the phaser beam and died, her form reverting back to that of a Manarkite. Fleeing the cave, a crowd of Manarkites approached Kirk and Chekov. Spock fired ship's phasers on a wide stun setting to knock out the attackers.

Captain's Log, Stardate 9734.2.
We have remanded the Manarkites to Starfleet custody on Starbase XIV…
Captain's Log: Supplemental.
We are proceeding to the Organia system to pick up new medical supplies for the Vanowen colonists…

At the starbase, the Manarkites confessed to colluding with Romulans in a conspiracy to take over the Enterprise. 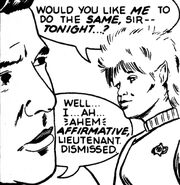 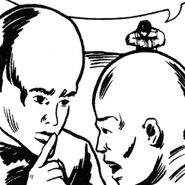 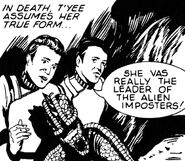 After dying, T'Yee reverted to her true form 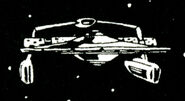 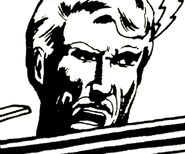