Just a note about Fed starship classes: after having paged through the strategy book, the Akula class is not the one we have here already, from Star Trek: Starfleet Command. Instead, it's the Akula variant of the Akyazi class perimeter action ship from Ships of the Star Fleet. So the variant, if not the Akyazi itself, has now been "adopted" into sphere of licensed materials. However, this begs the question of how we're going to handle the designation "Akula class".--Emperorkalan 13:12, 13 December 2006 (UTC)

I don't own this game, but i'm fascinated by the apparently large number of ships within... anyone able to unify them into a list here in the game article?

Yes individual ship names.. is the list you added complete, extracted from the software? IT looks pretty extensive, thanks for posting it. -- Captain MKB 05:44, 24 February 2008 (UTC)

It's as complete as I can find it. Here's a sample section (for the Ambassador class):

Certain ships are designated "hero ships" (those for which they have audio by Bakula, Shatner, Stewart, Brooks, or Mulgrew), and have their own specialized files. There don't seem to be NCC numbers specified for each ship. My guess is that they are part of the Logo files, so that any Ambassador ship (with the possible exception of the E-C) would get paired with one of the five logo files. In the next game, the exact pairings might be different. So it seems Legacy NCC numbers can't be relied on to be unique. (The ones that are noted on the list are from released promotional screen shots.)

And my thanks for doing the clean-up work after I called it a night. I'll start with the other races a bit later.--Emperorkalan 17:18, 24 February 2008 (UTC)

Oh yeah, I've been eager to add these -- Petri helped too.

Interesting about the registries -- looks like there's not much for us to associate with these ships there, unless we started a separate registries list.

Yeah, but some of the dates seem a bit off. I'll collect them and post them here (discussion). I started checking the Klingon ship names, but the list looks to be the same for every class. Disappointing. I'll post more when I have it.--Emperorkalan 06:44, 25 February 2008 (UTC)

ONe question with the NX-class ships -- are there any parameters for when the "USS" ones appear or do they get mixed together? I was thinking it might signify those vessels that were active after the Federation was founded. -- Captain MKB 18:16, 24 February 2008 (UTC)

I don't think so. The first line of names had no prefix, followed by lines of names with it. I'll double-check if there's a date difference, but I suspect the non-prefix names are for game scenarios only, not skirmish play. I will, double-check it, though.--Emperorkalan 15:27, 25 February 2008 (UTC)

The only other ship I've seen so far that raised a question is the Reliant -- listed as a refit -- making me wonder if it is a successor to the Star Trek II ship, or is it that ship itself. And the refit, does that mean the other Mirandas are TOS-style or just that the refit Mirandas have differend rollbar config. -- Captain MKB 15:49, 25 February 2008 (UTC)

As mentioned above, Klingon and Romulan ships pull their names from a randomized list that is used for all classes and eras.

a question -- on the Romulan shipnames, does the "Stormbird" in the list refer to the TOS D7? -- Captain MKB

There is a Romulan ship that uses that general design but I'll need to double-check before matching them. Legacy "repurposed" a few designs; e.g., Legacy's ENT-era Romulan battleship uses a design that in FASA's book was a TOS-movie-era troop transport. I'll see about getting some screen caps this weekend.--Emperorkalan 03:22, 11 April 2008 (UTC)

The ships that are in different eras and have different names on the same design I'll treat as separate classes -- seems like maybe they were repurposed from an in-universe POV also perhaps. -- Captain MKB 11:41, 11 April 2008 (UTC) 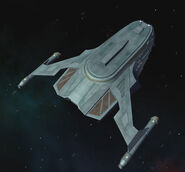 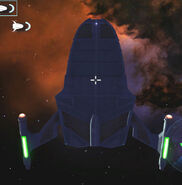 I don't know if it would be fanon or not but on Chris Jones Gaming site they added to this game so that you can fly Terran Vessels. Go to new worlds. And even pilot (being a new ship) differnet Federation ships with multiple registries and names. Rift Fleet 17:51, 10 October 2008 (UTC)

Retrieved from "https://memory-beta.fandom.com/wiki/Talk:Legacy_(game)?oldid=432146"
Community content is available under CC-BY-SA unless otherwise noted.