Thelian must have been in office in 2327, meaning that he had to serve the 2325-2328 term, but the other dates given in the succession box below are entirely conjectural and not supported by Enter the Wolves or Articles of the Federation.

He is shown in Enter The Wolves as wearing a Starfleet uniform. Maybe he became President later? -- turtletrekker 6 April

I don't own a copy of Enter the Wolves, alas. He doesn't seem to be wearing a uniform in the scan you put on his page, though. In any event, Articles makes it very clear that -- in the Novelverse, at least -- he had left Starfleet before becoming President and was President in 2327. Maybe the events of Enter the Wolves simply transpired in a different manner in the Novelverse than in the comic itself? -- Sci 07:16 8 April 2006 UTC 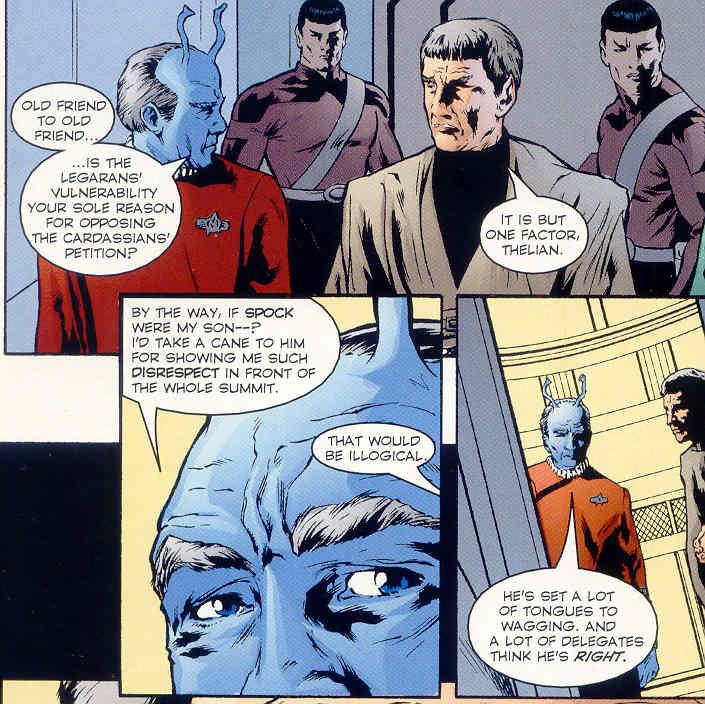 It's possible that te other Andorian is just an Andorian who happened to be there. I didn't upload the original, grainy pic, and noticed Thelian's scene with Sarek after uploading the clear version. --Turtletrekker

Hmm. That is strange indeed. One possibility, as I mentioned above, might be that the events of Enter the Wolves take place in a slightly different form in the Novelverse than in the comic itself. (Is that Thelian's only scene?) Another possibility is that, as a former Starfleet officer, Thelian likes to wear his uniform on formal occasions rather than wear Andorian formal dress. -- Sci 20:45 8 April 2006 UTC

OK, I retract the whole question. LOL! After re-reading the book a little more thoroughly, I found a passage that I over-looked earlier in the book in which Thelian- wearing his Starfleet uniform- is addressed as "President Thelian". My bad.

At any rate, I'm guessing that the Andorian we currently have pictured as Thelian, isn't. I'll try photoshopping around the word balloons on one of the images that we KNOW is Thelian.--Turtletrekker 07:37, 9 April 2006 (UTC)

OK, I used the image from the panel in which he is identified as President... 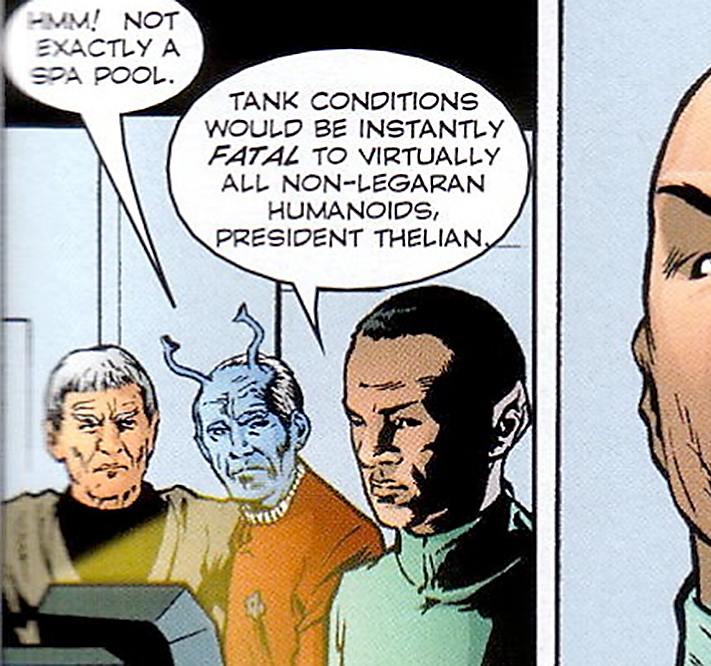 still, there have been benevolent governmental leaders that wore their military uniforms -- the british royal family, for example -- Captain M.K.B. 01:31, 15 October 2006 (UTC)

True... Except that the British Royal Family aren't leaders in anything but the most ceremonial sense of the term, so it's a bit more acceptable. In fact, with them, it implies service to the country instead of being served by the country -- it creates a sense of them being more connected to the common man. Whereas I rather imagine there'd be quite a bit a controversy if a British Prime Minister began wearing his military uniform everywhere. -- Sci 02:29 10 NOV 2006 UTC

He bears a striking resemblance to the bald Andorian commodore on the Federation Council in Star Trek IV. Is it possible he was meant to be him? -- Captain M.K.B. 17:51, 14 October 2006 (UTC)

I believe that KRAD once mentioned that the artist based Thelian on the ST: IV Andorian (which is why the Federation President is seen wearing a Starfleet uniform), but it was not meant to be the same one.--Turtletrekker 20:34, 14 October 2006 (UTC)

Still, it would be an easy way to get his picture. there's a 40-year time difference though, but then, who knows how andorians age?

We could... but I don't think we should. There's no real evidence that President Thelian was meant to be that particular Andorian, it creates a potential insinuation that Andorians don't age as quickly as Humans when this has not been established in any canonical or licensed works, and, well, frankly, this is a licensed work wiki, so why not use the licensed works for images? --Sci 04:00 15 OCT 2006 UTC

Retrieved from "https://memory-beta.fandom.com/wiki/Talk:Thelianaresth_th%27Vorothishria?oldid=45130"
Community content is available under CC-BY-SA unless otherwise noted.