20:0605
Target: Zargot was a Star Trek: The Original Series comic strip published in 1969. It was the first of 11 annual stories from the UK comic strips series and appeared in Joe 90: Top Secret Annual. In this story, the Enterprise came to the aid of a plague-stricken planet.

The USS Enterprise came across a Zargotian cruiser moments before it blew up. A rescue team scrambled to reach an ejection capsule, boarding it moments before its sole occupant died from a plague that could potentially affect Humans. James T. Kirk ordered the Enterprise to find the nearest planet.

The planet's inhabitants were suffering from the epidemic. Leonard McCoy met with their Doctor Ixta, who believed a cure could be made from herbs growing on neighboring planet Coltac. Enterprise raced there, with Kirk taking a team in Space Bug X-4 to the surface. While harvesting the herbs, they repelled two large dinosaurs with phaser fire.

Captain's log, stardate 20:1507. We have returned to Zargot with the herbs. McCoy working with aliens…

McCoy and Ixta succeeded in making an antidote, and five days later the inhabitants were cured. Zargotians celebrated with fireworks. 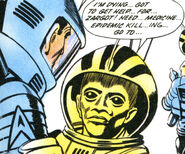 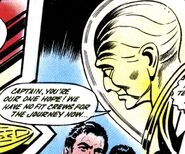 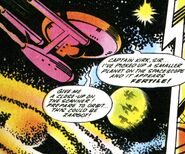 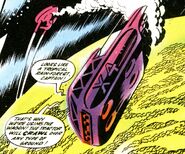 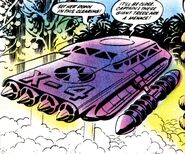