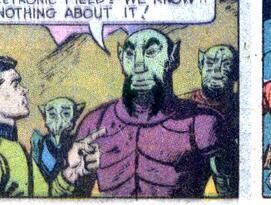 Targu was a native of a planet in the Nabu system in the 23rd century. A criminal, in 2265 he was sentenced by his people to be marooned on an asteroid which was doomed to explode. Shortly after his arrival, he made himself leader of the other criminals who were also stranded there. A year later, a landing party led by Captain James T. Kirk of the USS Enterprise visited the asteroid. Targu claimed that he and his men had been marooned there when their freighter crashed, but Kirk soon learned the truth from Lara. Targu captured the landing party and contacted Spock on the Enterprise, demanding that Spock beam up him and his men. Spock refused and instead sent a rescue party to free Targu's prisoners. Targu was killed when the asteroid exploded shortly afterwards. (TOS comic: "The Devil's Isle of Space")