2409
"Taris" is a mission in Star Trek Online available to Federation player characters. It is the fifth mission of the "Romulan Mystery" episode.

Mission text
The cause of the supernova that destroyed Romulus remains a mystery. Our allies in the Romulan Republic have a theory on the matter, however.

They believe that Taris, the former Praetor of the Romulan Star Empire, is responsible. Republic forces attempted to apprehend her, but she escaped through an Iconian gateway.

Recently, the Republic has discovered new information that could help us track down Taris. We want you to rendezvous with the RRW Lleiset, the new flagship of the Romulan Republic fleet, and provide any assistance you can.

You travel to the edge of the Hobus system (which is under quarantine due to the 2387 supernova) and rendezvous with the RRW Lleiset. Conferring with Commander Tiaru Jarok, you learn that the Romulan Republic believes former Praetor Taris to be responsible for the supernova, and the Lleiset intelligence officer, Gaius Selan, beams onto your ship to help you find Taris.

You and Selan travel into the system. After taking several scans, you discover all the materials that were used in Taris's device to detonate Hobus. A "shield" is detected over a large crater and you scan it, and the IRW Sithesh, a D'deridex-class warbird commanded by Reman Commander Xikalen, arrives to investigate their presence. You disable the Sithesh in the ensuing skirmish and hide your starship in the supernova debris when a warbird commanded by Arranhu arrives to investigate.

Arranhu's warbird leaves, and you follow it to Iconia per a suggestion from Selan. You destroy the IRW Intrakhu in orbit to gain the command codes for another shield on Iconia's surface, and Selan disables the shield.

You and Selan beam down to an underground facility in Iconia, where you find Taris speaking to Arranhu. You defeat the Reman guards and pursue the two to a gateway. As Taris activates it, a trio of Reman guards push her back and escape through the gateway, and you capture Taris. You beam Taris to the brig on your ship and destroy the gateway, beaming up yourselves when the machine is destroyed.

The IRW Leahval arrives in the vicinity of Iconia. Empress Sela demands that they turn Taris over to her, but she is warded off by the arrival of a Starfleet taskforce led by the USS Belfast, and you beam Taris over to the Belfast brig. The Lleiset arrives in the area, and Selan beams back to his old ship. 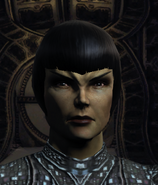 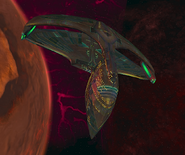