Ensign Taskul was an Arcturian mining engineer assigned to the USS Enterprise in the late 23rd century.

After the ship’s dilithium reserves were fused in 2273, the Enterprise traveled for nine days at impulse to Forma VI, the site of a Federation colony and a played-out dilithium mine. Ensign Taskul was chosen for the landing party by James T. Kirk as an expert in exploring alternative strategies to scan for dilithium. Taskul cited a new method of detection which could locate a dilithium vein despite the normal shielding effect of ores like lead or gold. Later, despite using every known technique, Taskul confessed to having found no dilithium in the mine. Spock and a troop of Klingons also were unsuccessful. (TOS comic: "Dilithium Dilemma")

This scene was depicted in dropped panels for the strip published May 25, 1980, not reprinted in The Newspaper Comics, Volume 1. Dropped panels were illustrations in Sunday strips which could be included or removed depending on the panel arrangement used in each newspaper's Sunday comics section. (Dropped panel)

During the biannual maintenance in 2274 at Hus-24, the crews of the Enterprise and USS Venture (Constitution-class) were detained and enslaved, with women working in grain fields and men excavating a mine. As the men attempted to escape, Taskul questioned Kirk’s orders to Chekov to set their nine captured hand phasers on heavy stun, when they faced an opposition of hundreds of Husians who had their weapons set to kill. (TOS comic: "Husian Gambit")

The scene was depicted in a dropped panel from Dec. 7, 1980, not reprinted in The Newspaper Comics, Volume 1. (Dropped panel) 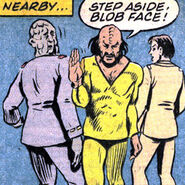 Taskul insulted by a Klingon.

Chained with Hikaru Sulu at Hus-24.
Add a photo to this gallery

Retrieved from "https://memory-beta.fandom.com/wiki/Taskul?oldid=694201"
Community content is available under CC-BY-SA unless otherwise noted.