The Original Series (US Comic Strips) No. 18

9620-9637.02
Terminally Yours is a Star Trek: The Original Series comic strip by Gerry Conway. It is the 18th story in the US Comic Strips series, published in newspapers over a period of 41 days by the Los Angeles Times Syndicate. This story depicts events after Captain Kirk's second five-year mission but before TOS movie: The Wrath of Khan. In this story, McCoy contracts a deadly plague and flees the Enterprise to protect its crew.

Captain's Log, stardate 9620.
Yesterday, a thief aboard the Enterprise stole one of our shuttlecraft. The theft remained undetected for hours, because the thief had drugged the duty officer and apparently knew enough about the Enterprise to avoid alerting the rest of the ship. The medical staff has failed to revive the duty officer, so I had Dr. McCoy paged—but he hasn't responded, and the door to his quarter is sealed shut with a new computer code... so I have no choice but to order a privacy override.

In McCoy's quarters, security finds a sealed message disc with a recording made by the doctor. In the briefing room, staff listens as McCoy recounts events from their mission twelve days prior to the recording, when they responded to a distress call from Circe-Six and beamed down in environmental suits to discover most of the 30,000 colonists were dead from the most virulent outbreak of an epidemic McCoy said he'd ever seen. While checking a corpse, he accidentally cut his hand and exposed himself to the toxin. He was too embarrassed to report the incident, but after returning to the ship and analyzing the cut, he confirmed being infected. He sterilizes the medical lab and his quarters, then flees the Enterprise in a two-man shuttlecraft. Kirk and Spock agree that McCoy was been thinking rationally, since quarantine could easily have been set up aboard the ship, so they set out to find McCoy and seek a cure for the disease.

McCoy's log, stardate 9623.
It's getting harder to think clearly... the disease I caught on Circe-Six is already well progressed... But I must stay sane... long enough to reach my destination that's the only way... to keep the Enterprise safe... have to... keep them safe...
Science log, stardate 9630.
Spock reporting. I have examined samples of Dr. McCoy's infected blood and I have determined the nature of the disease which destroyed the inhabitants of Circe-Two [sic], and may yet cost McCoy his life...

Spock identifies the contagion as the same virus that brought about the Red Plague on Vulcan two centuries earlier. Kirk agrees that Spock should proceed to Vulcan aboard a shuttle and retrieve the cure while the Enterprise continues searching for McCoy's shuttle.

Considering where McCoy might go since his shuttle hasn't been found through conventional searches, Kirk theorizes McCoy might have returned to Circe-Two, since it is already contaminated by the virus, so his being there won't harm anyone else. After arriving Circe-Two, Kirk, Chapel and Scott prepare to beam down in environmental suits to search for him, leaving Sulu in command.

Science log, stardate 9633.3.
I saw no need to worry Admiral Kirk with any additional concerns before my departure from the Enterprise, so I have neglected to inform him that there is some small danger involved in attaining the cure for McCoy's contagion. In any case, the probability that I might die in the attempt is only .57808. An acceptable risk. Spock out.
Science log, stardate 9635.2.
I have arrived on Vulcan, in desolate out-region known as Kendha-Ya—"the Dead Ocean." It was here, two centuries ago, that the Red Plague killed more than a million of my people—and may today kill Dr. McCoy! Only one thing saved us... the healing nectar of a flowering vegetation known as Shin-Ka-Ti. The question is... after 200 years, do any of these flowers yet remain?

Spock locates a living Shin-Ka-Ti plant, and carefully removes it. But at that moment, an enormous Vulcan sand worm pops out of the dry ocean sand and threatens him. Spock fires his phaser at its head, and it collapses on top of him, forcing him to shoot his way out of the dead animal.

Captain's log, stardate 9636.3.
Commander Sulu reporting for Admiral Kirk; the admiral has spent several hours on Circe-Two, searching for Dr. McCoy, who is dying from a disease known only as the red plague. So far, the admiral's found no trace of McCoy, but even if he does find him, there's little we can...

Rendezvousing with the Enterprise, Spock learns that McCoy is on the surface, so Spock changes course and lands near the search party. They have found McCoy, but he is hidden in a building and shooting at them to keep them away. Spock plays a gambit, implying to McCoy that the Vulcan is immune to the virus in order to get close to him. Spock distracts McCoy long enough for Chapel to sneak in and hypo McCoy with an extract from the Shin-Ka-Ti plant. Spock asks her to inject himself, as Vulcans are more susceptible to the virus than humans.

Chapel oversees McCoy and Spock recovering in sickbay. Back to normal, McCoy explains how quickly he became paranoid after being exposed. Spock denies acting heroically to save McCoy's life, citing the doctor's value as a Starfleet investment. 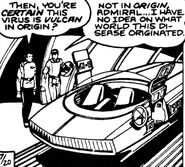 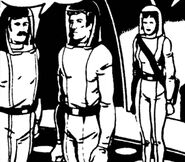 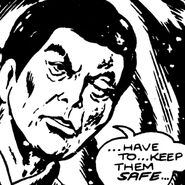 Lesions on McCoy, a symptom of the virus