The Abode of Life

The Abode of Life

The Original Series No. 6

The citizens of Mercan cannot conceive of worlds beyond their own. Their sun, Mercaniad, is prone to deadly, radioactive flare-ups, and the Mercans have organized their life around the need to survive the Ordeal - until a strange visitor appears from out of nowhere...

The Enterprise, badly crippled and in desperate need of repairs, must seek help from a people who cannot believe in its existence. Mercaniad is about to blow, and James Kirk faces an impossible choice: to attack the sun itself and save his ship and crew - or let a people live in peace, in the only world they know...

The Abode of Life.

The Enterprise has been sent to study a group of gravitational anomalies in the Orion Arm. However, an encounter with one such anomaly sends them through a fold in space, throwing them hundreds of parsecs into unexplored space and damaging their warp engines. Since it will take them over a hundred years to travel home at the speeds available, obtaining materials for repairs are essential.

Transporter activity is traced to Mercan, a single planet orbiting an isolated sun, Mercaniad, where all travel is done by transporters covering the entire planet. Kirk beams down with a landing party only to find a tense situation between three groups. The Guardians have found a way to predict a series of explosions from Mercaniad that bathe the planet in harmful radiation and constructed protective Keeps for the population, giving themselves a position of power, and employed the Proctors as a police force. However, the third group, the Technic, have not only begun experimenting in banned technologies such as gene therapy but begun theorising of other worlds with life on them, which has been branded a heresy.

The Enterprise party are taken into custody along with a Technic named Orun. The Guardians refuse to believe they are from another world, instead suspecting they have been constructed by the Technic, and decide to leave half their party on the surface during one of the radiation-soaking Ordeals and keep the others for experimentation. At this, the group break out of custody. An attempt by the Technic to rescue them is interrupted by the Proctors, prompting Kirk to beam everyone present back to the Enterprise.

The ship proves insufficient to protect them from the Ordeal so Kirk authorises Spock to fire two photon torpedoes into Mercaniad to stabilise it, despite the risk of causing a supernova. Fortunately, the attempt works but means that the Guardians' position as the only ones who can protect their people from the Ordeals is at an end.

After showing the Technics and Proctors onboard the view of space to prove his story, Kirk also brings a group of Guardians onboard to show them the same. With the Prime Directive irrevocably broken, Kirk follows Spock's suggestion to offer the planet Federation membership and acts as a mediator between the three groups. Quickly accepting the new reality, it is decided the Guardians will maintain their leadership position as lawmakers, with the Technic now free to pursue their research in peace. With the engines repaired thanks to the Technic's help, the Enterprise departs for home with two of the Technic aboard as ambassadors. 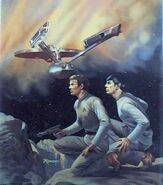 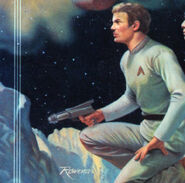 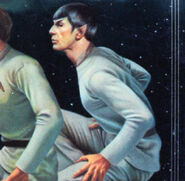