unknown
"The Ageless One" was a 15-page Star Trek: The Original Series comic strip published in 1970. It was the 14th story arc in the UK comic strips series, released in six parts within issues of TV21 Weekly. This was the second of four stories drawn by Mike Noble.

In this story, James T. Kirk and Spock become trapped in the 33rd century.

Teaser, 11 July 1970
Beaming down to investigate the surface of an unknown planet in the Omega galaxy, Captain Kirk and Mr. Spock found themselves kidnapped in an utterly incredible way. Through the genius of Palnak, the sinister "Collector" whose museum housed all manner of plant and life form, they were transported a thousand years forward in time!

Discovering an unexplored planet, the USS Enterprise launches a probe into orbit, only to have it vibrate and mysteriously disappear. James T. Kirk and Spock beam down to investigate, only to encounter sonic vibrations which knock them to the ground. When the air calms and they recover, a large domed structure stands before them. Unable to contact the ship, they approach the entrance of the building, only to be seized by grappler arms and tossed into an enormous hall full of biological specimens, museum exhibits. A blue squid-like being approaches on a hovering disc. Suspecting that they might become the newest additions to the museum, Kirk activates his translator communicator and diplomatically introduces himself.

Kirk and Spock have time-traveled into the 33rd century. The non-humanoid being, Palnak, claims to be ageless, having built the museum five hundred years earlier on the planet. The Enterprise is visible on a monitor screen, and Palnak says that if the ship remains in orbit for a thousand years they will receive Kirk's communicator signal. With a small control device, Palnak paralyzes Kirk and Spock, then carries them further into the museum.

Aboard the Enterprise, Nyota Uhura picks up a ghostly signal, an image from inside the museum, which the computer identifies as coming from the 33rd century. Hikaru Sulu realizes that the landing party has time-traveled, and Montgomery Scott prepares a rescue operation.

Palnak begins processing Kirk and Spock, compelling the paralyzed officers to provide information on their life histories. Palnak initiates a process to numb them before killing and preserving them, but is distracted when a monitor shows two shuttlecraft approaching the surface in the 23rd century. Realizing he'd left his screen on, allowing two-way transmission into the past which can be traced, Palnak becomes excited at the prospect of adding the shuttles and their crews to his collection. He moves off to control the time-slip effect, leaving Kirk and Spock unattended. Their paralysis wears off, and they sneak into the control room behind Palnak, able to watch as he manipulates the equipment to bring the shuttles forward in time.

As soon as Scott arrives in the 33rd century, he hails Kirk, but Kirk's communicator unfortunately alerts Palnak to their presence. Kirk and Spock retreat into the museum gallery and spots a showcase containing a pair of bipedal armored soldiers. They break the exhibit glass and steal the rifles. Defensive rays shoot out near them. Palnak orders them to stop or they will be killed. Kirk warns Scott about the grapplers by the museum entrance, and Scott's rescue party blows the entrance apart with phaser rifles. Kirk shoots and destroys Palnak's control device, and it flees into the museum, claiming it'd rather blow up the museum than be defeated. The Starfleet officers flee, but first Spock runs to the time-slip mechanism and activates it, triggering the sonic vibration effect that returns the shuttles and officers to the 23rd century. 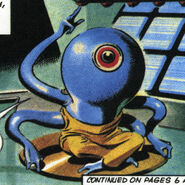 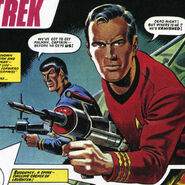 Kirk and Spock, armed with rifles.