Letter column teaser
We begin a two-part story set near the end of the five-year mission. Captain Kirk is buried alive in an ancient temple when a war-weary race attacks the Enterprise. Spock is determined to rescue his Captain and the aliens are just as determined to stop him.

In 2290, Kirk feels some trepidation as the USS Enterprise-A arrives in orbit of Gribbin II, and he recalls a mission from twenty years earlier...

Captain's log, stardate 5992.4.
The Enterprise is now in orbit around Veneu II. Sensors show no intelligent life forms, though the world has extensive ruins from an advanced culture. I will beam down with Mr. Spock and a landing party to investigate residual energy readings and make a preliminary determination about the value of the planet as an archaeological site.
Captain's personal log.
With less than sixty days left in our five-year mission of exploration, it is clear that both myself and the crew approach this mission with a sense of trepidation. The dead world below us may too much of a symbol of the end of our mission, and the loss of we all face.
Though reassignments will put most of us back into space, myself and the crew will no doubt spread among several different ships. Our duty will bring us new responsibilities and new opportunities. But for now, our thoughts are running to endings, not beginnings.

The energy readings come from a vast structure containing an operable long distance transporter able to beam objects through time to various locations within the sector. The building is shaken as alien vessels strafe it. The team heads to the exit, but Kirk is trapped when it collapses under debris. Back aboard the Enterprise, Montgomery Scott is unable to locate Kirk's communicator signal anywhere within the structure.

The attacking vessels warn Spock that the Enterprise is trespassing and must withdraw, and their leader doesn't believe Spock's contention that Kirk is still on the surface. The attackers fire on the starship, but with minimal impact to the shields. When the alien flagship tries to ram the Enterprise, Scott secures the attacker with a tractor beam and they relent. Commander Ikemar allows Spock to beam to the flagship and is swayed by Spock's calm logic, agreeing to supervise a landing party visit to search for Kirk. After excavating the structure's collapsed entrance, they discover that Kirk has been transported to another planet in the sector, arriving at some point within the previous three hundred years.

Elsewhere, Kirk knows he's no longer on Veneu II as he spots three moons. He trusts that the Enterprise will find him eventually, and recalls Ben Finney's advice from Starfleet Academy that his job now is to survive and make sure he is able to be found. He finds ample water, small game, fish and plant life in the area. His Starfleet training, combined with experience on undeveloped planets with Miramanee and Tyree, allows him to survive. He is able to make paper and ink, and begins writing down log entries. After 185 days, he's explored a small continent and found that the planet is devoid of intelligent life. No signals are picked up by his communicator and he is convinced that he is totally alone. Knowing he has a duty to return to Starfleet, he conceives a plan that will get him home.

But that night, he finds himself in jeopardy as he is attacked by a group of tusked, bear-like animals.

Kirk aiming a bow and arrow. 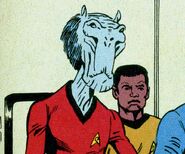 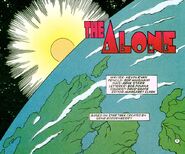