"The Ambergris Element" was the 13th episode of Star Trek: The Animated Series in the show's first season, airing during the week of 1 December 1973. The episode was written by Margaret Armen, who also wrote "The Lorelei Signal". It was directed by Hal Sutherland and novelized in Log Five by Alan Dean Foster.

VHS teaser
While studying a planet whose surface is entirely covered with water, Kirk and Spock are transformed into water breathers by a frightening aquatic sur-snake.

"Captain's log: Stardate 5499.9. We are orbiting the planet Argo. Argo was once a land planet, but its surface is now almost completely covered by water. The change was caused by violent seismic disturbances. Our mission is to study the effects which the quakes and other phenomena had on its surface. This knowledge may save millions of lives on a Federation planet, identical to Argo, which will soon be undergoing similar transformation."

The crew lands in a specially designed aqua-shuttle but is immediately attacked by a sur-snake and Kirk and Spock become trapped in the monster's grip.

"Ship's Log: Stardate 5504.2, Lieutenant Commander Montgomery Scott in command. Captain Kirk and First Officer Spock have been missing for almost five days. Search parties can find no trace of them or the aqua shuttle. Dr. McCoy and I are continuing the search at a greater distance from the attack point."

"Medical Log: Stardate 5506.2. Captain Kirk and First Officer Spock were rescued forty-eight hours ago. They have no recollection of what happened to them after they were attacked, but medical examinations show an unidentified substance in the blood stream has affected their entire metabolism and changed them into water breathers. Their internal structure is completely transformed, and even their eyes are covered with a transparent film, like the second eyelid of a fish. So far all efforts to return them to normal have failed."

McCoy says, "We're stumped, Jim. The hormone seems to be the major factor in your mutation but we just can't identify it." Kirk asks, "Are you sure the mutation wasn't somehow accomplished naturally?" McCoy replies, "It's infused into your bodies at key structural points. It had to be done by injection." Kirk demands, "But can't you duplicate it Bones? Your medical computers have information of every procedure in the Federation's hospitals." McCoy says, "It's highly sophisticated and completely unknown to us." Spock inserts, "That implies there are intelligent lifeforms on Argo." McCoy replies, "The sensors don't indicate any life forms down there aside from fish.[fish]]." Spock thinks the readings may be incomplete. Kirk can't spend the rest of his life confined to a tank so he and Spock must travel underwater to find the planets inhabitants, the Aquans, in the hope they will be able to return them to their normal Human selves.

Kirk and Spock explore the submerged Argo and find a group of inhabitants who hate any air breathers. They want them to leave. Their young saved them once but it won't happen again. The two officers soon find a beautiful underwater city. Hesitantly, the Aquans agree to perform surgery to return Kirk and Spock to normal, but when Scotty dives down to warn of an impending quake, they become fearful of air-breathing spies. Kirk and Spock are deemed treacherous and are sentenced to death.

Rila, a water breather, agrees to help them if they will in turn help her find a buried ancient city in ruins whose archives may contain a way to reverse the mutation. They discover that the substance in their blood streams is similar to the ambergris of Earth whales. The reverse mutation is induced by an infusion of an antitoxin made from the venom of a deadly giant sur-snake. The Aquans help them obtain the necessary medicine, but Kirk nearly dies from the vaccination.

In orbit, the USS Enterprise uses its phasers to hit the uninhabited sections of the planet in an attempt to move the quake's epicenter away from the Aquan city and new land masses are born. Grateful for saving their lives, the young Aquans make their ancient records available to the Federation and decide to use the new found medicine to reverse their water-breathing mutations and resume life above ground. Kirk implores them not to lose contact with their underwater ancestors. The elders declare they will pass ordainments to forbid it and this time they will not ignore them. 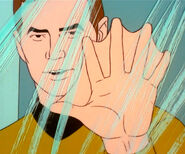 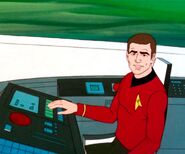 The USS Enterprise over Argo