1926.11
The Animal People – They lived like beasts but rebelled like men! — "The Animal People" was a Star Trek comic book story published by Gold Key Comics in 1976, the 32nd issue of their TOS series. It was the 29th issue drawn by Alberto Giolitti and the seventh written by Arnold Drake.

In this story, James T. Kirk and Spock became embroiled in a planetary civil war.

"Help! Our world is overrun with packs of maddened animals!" That was the call that brought the starship Enterprise to planet Hercula! But it was only the beginning of a space mystery that was 10,000 years in unfolding and threatened the Enterprise crew and that entire world!

Captain's log, star date 19:26:11. An interstellar distress call has brought our starship to — the planet Hercula!

The call was to help stop wild animal attacks … from cavemen. These were Yerbas, a seemingly non-sentient species often caged in zoos and used for hard labor. Emperor Lidoro had asked for military intervention, so Kirk awaited approval from Starfleet. Overnight, Spock inspected the zoo, only to be knocked out by a group of escaping Yerba. He was brought to a Yerba encampment before their leader Germal, who could speak. The others communicated through sign language. Germal said that the Yerba hated killing but were fighting for their freedom. Spock asked Germal to meet with Lidoro, thinking it would help end hostilities.

Just then, witnessed by Kirk, Colonel Mynota bombed the Yerba camp from a rocket plane. Germal was horrified by the slaughter. As the survivors headed into the mountains for cover, Spock heard sounds — their version of freedom songs. He decided to take preemptive action – he knocked out Germal and started carrying her back down the mountain. Mynota spotted them with a magni-scope and ordered his troops to open fire. Kirk grabbed the scope and saw Spock. Leonard McCoy had to threaten Mynota before the order would be countermanded. Back at the palace, Emperor Lidoro's son General Jivi recognized Germal as the one who saved his life as a child. Kirk recognized the looks between them as love. But Lidoro dismissed Germal as a fluke of nature and demanded she record a surrender message.

Captain's log, star date 19:26.12. Replying to a call for help from the planet Hercula, we offered to assist in putting down wild animal attacks! But the conditions suddenly seem to be strangely shifting!

Walking through the Herculese city, Kirk, Spock and McCoy came across a line of adults carrying infants into a facility. A guard explained that Yerbas required throat surgery early in their lives or they would strangle. The landing party realized that Germal was not a fluke – the Herculese were deliberately compromising the Yerba's development and were now engaged in genocide. Germal agreed to send a surrender message to her people in front of television cameras, and her images were projected above the mountains where the Yerba hid. However, her sign language message was not to surrender, but to go to war – she was afraid for her people. Jivi resigned as general and Kirk withdrew Federation support. Lidoro imprisoned them all. The Yerba fought back, striking at tanks with bows and arrows tipped with small atomic weapons.

In their cells, Kirk married Jivi and Germal. After the emperor was notified, he revealed a secret known only to emperors: the Herculese were not native to Hercula, but had colonized it ten millennia ago. The native Yerba had praised the new arrivals, so they were subjugated, and when they resisted, the adults were wiped out and their children made mute to think they were animals. Meanwhile, war raged outside. Jivi and Germal appeared on television, announcing their marriage and that they had poisoned themselves. They died together onscreen a few seconds later. It shocked the populace and ending the fighting.

Later, Lidoro erected a statue of the married couple. He had agreed to share rule with an elected Yerba. Before the landing party left, Lidoro showed them an undamaged infant Yerba, as the surgeries had been permanently outlawed.

Hercula (Room of the Sacred Truth • Tomb of the Great Ones) 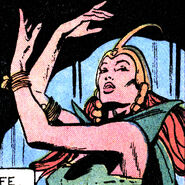 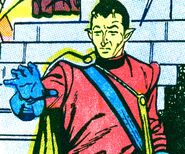 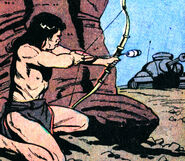 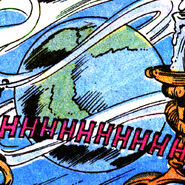