3847.5
Love & Death – "The Argon Affair!" was the 38th issue of DC Comics' first monthly TOS series, published in May 1987. Written by Michael Fleisher, it is the only Star Trek story drawn to date by Adam Kubert. In this story, set during James T. Kirk's first five-year mission, the USS Enterprise dealt with saboteurs and pirates at Starbase 10.

Captain's log, stardate 3847.5
I have ordered the Enterprise to intercept and repel a trio of Argon pirate craft engaged in unlawful penetration of Federation space... I only hope we haven't bitten off more than we can chew...

After chasing away the enemy corsairs, the USS Enterprise diverts to Starbase 10. James T. Kirk and Spock beam down to the Starbase 10 planet and update Commodore George Stocker, who recommends that they explore some nearby ancient ruins while the ship's battle damage is being repaired. The ruins are something of a tourist attraction and prove diverting, but Montgomery Scott asks Spock to help inspect damage to some of the ship's memory banks, so he beams up.

Amid the ruins, Kirk comes across a fight between Connie McQueen and some Argon pirates wearing body armor, and he comes to her aid. Armed Argon reinforcements arrive, and they flee into a damaged observatory. She says that her father was killed by Argons four years ago, and since then she's been on a quest to take revenge. Kirk is sympathetic, helps her hide from them, and eventually they are able to escape to the Enterprise.

McQueen's friendliness masks her true purpose, as she slips a scrambler into the ship's deflector shield system so that Argons can capture the starship. The Enterprise leaves orbit and is soon confronted by an Argon corsair. Scott has detected McQueen's sabotage, however, and removed the scrambler. Kirk lets the corsair come close. He raises shields just as they fire, then Hikaru Sulu disables their engines with a well-placed phaser shot. McQueen and the Argon crew are placed into custody. 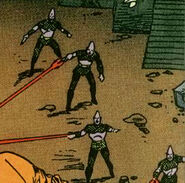 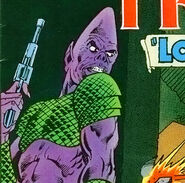 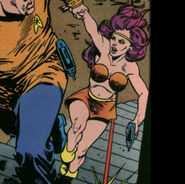 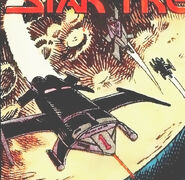 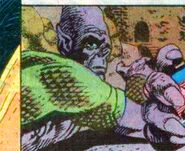