For almost three decades, millions of television viewers and moviegoers around the world have thrilled to the exciting adventures of the most successful science fiction creation of all time—Star Trek. And during all that time, William Shatner has portrayed Star Trek's most dynamic hero—Captain James Tiberius Kirk, a gallant commander of the legendary starship Enterprise and her crew.

Now William Shatner brings his unique blend of talents as an actor, writer, director, and producer, as well as bestselling author and creator of the acclaimed TekWar novels and television series, to tell the story only he can, of Captain Kirk's greatest adventure.

The time—six months prior to the launch of the USS Enterprise-B and the tragic loss of Captain James T. Kirk in deep space.

The place—Earth, where the galaxy's most renowned hero must now face the spectre of retirement and a life devoid of challenge and excitement.

But in the apparent twilight of his career, Kirk's path takes an unexpected turn when a mysterious young woman offers him an irresistible adventure—a perilous voyage to an uncharted planet where he will confront the ultimate threat to the fragile peace between the Federation and the Klingon Empire, and the ultimate temptation—a chance to actually recapture his youth.

Turning his back on his friends, Spock and McCoy, and hunted by Captain Sulu's USS Excelsior, Kirk soon stands alone as defender of a world of incredible vitality and sensual beauty where he must choose between conquering the gravest challenge of his career, or surrendering to the greatest passion of his life.

What arises from The Ashes of Eden is no less that a new understanding of one of science fiction's greatest heroes, and one of the most gripping—and personal—Star Trek stories ever told.

The book starts out with Spock on the mountain where Kirk was buried by Captain Picard at the conclusion of the Film Star Trek Generations. Sitting down Spock begins to reminisce about the final adventure of James T. Kirk before being lost on the maiden voyage of the Enterprise B.

The reminisce starts out with Kirk running a holo simulation trial for Starfleet Technicians in the Cochrane Physics Hall of Starfleet Academy. The simulation was of one of Kirk's earlier missions dating back to when he was a Lieutenant on the Farragut. Beamed down to Tycho IV, Lt. Kirk and the away team including Androvar Drake, Weapons officer Faith Morgan and Ensign Galt are being hunted by a Dikironium cloud creature that feeds off of the corpuscles of iron-based blood until its victims have died. So far Faith Morgan and Ensign Galt have both died leaving only Drake and Kirk on the surface. On the Farragut, Captain Garrovick orders Kirk to provide the coordinates for a phaser barrage to take out the being. Providing the coordinates to his captain, the Farragut fires her phasers at the beast. Attracting the attention of the beast, it goes into orbit and destroys the ship before coming back down finish of the away team.

With that, Jim ends the holo simulation and returns to the real world. While speakings with the Techs about the HoloSuit he wore for the simulation, the Techs question Kirk on his exploits and refer to Kirk as a Hero. Jim states that he was just doing his job, but the techs don't understand the statement and continue with their hero worship. More than anything Kirk is annoyed with the hero worship but humors them up to a point. He feels frustrated, a "Starship Captain without a Starship" as well as trapped with nowhere to go.

Later on in the evening, Kirk is at Carol Marcus's place in San Francisco drinking scotch and watching a thundershower. He feels the Pull of the Enterprise up in Spacedock, The need to take her out one more time. More than anything Jim is feeling his age, and the need to do something, anything. Again Kirk begins to feel his age, he feels old. Carol approaches and questions him on the Kirk Farm, they place where Jim grew up. Advocates handling his parents estate wanted him to make the final decision, as to what he should do with the property. In the end, he and Carol get into an argument and Jim returns to drinking and watching the thundershower.

During this time, Chekov and Uhura are on a old space station: Dark Range Platform. Chekov and Uhura's mission is to find Klingon arms dealers who are willing to sell K'tinga-class cruisers. The Two pose as two Ex-Starfleet officers, Chekov being the one who was drummed out of Starfleet by punching an Admiral in the face.

2250
Kirk and Drake enter Academy as part of the same class.
2253
The Klingons and Romulans establish a joint colony on Chal.
2262
Carol Marcus informs Kirk that she doesn't want him to be a part of their son David's life.
2293
Kirk considers retirement as Drake assumes command of the admiralty.
2371
Spock reflects on the loss of his friend on Veridian III. 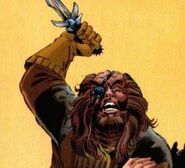 Teilani throws herself at Kirk.
Add a photo to this gallery

Retrieved from "https://memory-beta.fandom.com/wiki/The_Ashes_of_Eden?oldid=404566"
Community content is available under CC-BY-SA unless otherwise noted.