The rules are simple: draw a target. Track him down and "kill" him with a spork. Take your victim's target for your own. Oh, and make sure the player with your name doesn't get to you first. No safe zones. No time outs. The game ends when only one player remains.

James T. Kirk is playing for fun. Leonard "Bones" McCoy is playing to get closer to a girl. But when a series of explosions rocks the usually placid Starfleet Academy campus, it becomes clear that somebody is playing the game for real. Is it one of the visiting Varkolak, on Earth to attend an intergalactic medical conference? Or could it be a member of a super-secret society at the Academy dedicated to taking care of threats to the Federation, no matter what rules they have to break to do it? Find out in The Assassination Game. 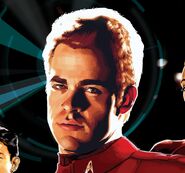