In this story, McCoy must help a planet fend off huge parasites, or its inhabitants will all be driven mad.

In one moment, there was peace and tranquility… in another, havoc reigned! And behind it was a force as insidious as a cosmic plague, more explosive than a super-nova!

Captain's log, star date 3313.5.
On exploratory mission to a little known sector of the galaxy, sensor readings indicate an asteroid with life forms...

Having found an inhabited, ringed, class M asteroid, Captain James T. Kirk, Spock, McCoy and geologist Freyer beam down. Strangely, peaceful-looking towns coexist with devastated portions. Kirk introduces his landing party to the indigenous humanoid population, showing them how McCoy takes readings with his medical tricorder and how Freyer takes soil samples. When Freyer tastes one of the samples, one of the locals panics. Suddenly, everyone in the town goes insane and starts to attack the landing party. The Starfleet officers flee into a cavern on a hillside. McCoy wants to analyze the erratic brainwave patterns he detected in the humanoids. Freyer himself goes insane and threatens to kill them with his phaser. Spock knocks him out with a Vulcan nerve pinch. In sickbay, McCoy diagnoses Freyer with Akwood's syndrome, a curable viral infection that causes temporary insanity. However, the antidote isn't working.

Captain's log, star date 3315.9.
Mr. Spock has summoned us to the bridge, where an even stranger sight has been projected onto the main view screen!

Spock discovers that a Giant Brain organism lives within the core of the asteroid, one which generates large quantities of life energy into the lifeforms on the surface. This brain entity had been infected by Akwood's syndrome 100 millennia ago. Since then, the viral agent has mutated into a huge strain. As the senior officers discuss how or whether the Prime Directive applies, Freyer experiences a second spell of insanity, requiring a tranquilizer to calm him. Kirk decides to try to cure Freyer and the Giant Brain. Freyer's infection allows him to sense the location of the viruses, so he accompanies Kirk and McCoy as they materialize within the brain entity. Huge antibodies pursue them. Freyer leads Kirk and McCoy toward a crevasse containing a large concentration of the viruses. Freyer leaps into the crevasse and lures the remaining viruses into one spot. At Freyer's urging, and with antibodies surrounding them, McCoy sprays the antidote all through the crevasse. All of the viruses collapse and die, but not before they kill Freyer. 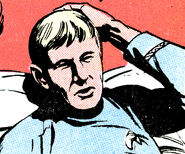 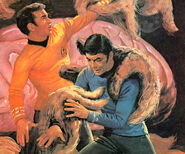 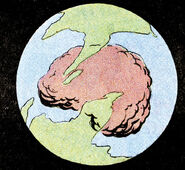 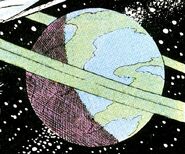