11:26.1
Vulcan furies overtake the Enterprise crew!—"The Brain Shockers" was a comic, the 11th issue of the Gold Key imprint's series of comics based on Star Trek: The Original Series, and the 11th Star Trek comic released, overall. This issue was written by Len Wein and drawn by Alberto Giolitti.

Once again, the men of the USS Enterprise battle for their lives against an unknown menace — but this time, the deadly danger comes from deep within the heart of the mighty starship itself — and it threatens madness for everyone it touches...

Aboard the Enterprise, Kirk and Spock warn Yeoman Dorrie Trask not to open a door from which huge clawed hands are emerging…

On the bridge, McCoy expresses his concern that the bridge crew have not had leave for months. Yeoman Dorrie Trask asks Kirk to sign a requisition for plastowels, which Kirk tells her can be found on Level 7. Spock detects rising power levels on a small area of the planet's surface. He activates the force screen as the Enterprise is struck by force beams. When the blasts cease, Spock reports that damage is minor. Kirk orders him to run a personnel check. Meanwhile, on Level 7 Yeoman Trask recovers from the impact and notices a storeroom door marked "CAUTION Do Not Open Off-Limits". Opening the door to make sure nothing inside is broken, she is horrified by bestial, insubstantial things that pour out into the corridor and toward the air-vents, leaving her unconscious.

The invisible things arrive on the bridge through the ventilation system and enter the bodies of the bridge crew. Every crewmember has reported in to Spock except Yeoman Pandora Trask. Remembering that she is on Level 7, Kirk goes there to find that Room 101 is open. He contacts Spock and tells him they can no longer keep the room's contents a secret. In Sick Bay, Spock tells McCoy about what was in Room 101. Thousands of years earlier some Vulcans removed their emotions and sealed them in bottles. When they realized that this process harmed the soul, the Vulcans destroyed their equipment, but the bottled emotions survived. The Enterprise was carrying them to Beta IV, where the Vulcans have erected a shrine to house them. The bottles were in Room 101, where they were broken during the ray attack; the emotions are now loose on the ship.

Kirk and Scotty lead a landing party to the surface; Kirk asks Spock and McCoy to find the emotions and bottle them again. Arriving on the planet, Kirk and Scotty realize that Chekov, Sulu and the other landing party members are not with them. They hear a voice in their minds welcoming them to Pollux II. The voice falls silent, and Kirk and Scotty set out through the jungle. Hearing something in the bushes, Kirk is surprised to discover Spock and McCoy. They were unable to contact him by communicator, and therefore beamed down with several other crewmembers, who have vanished. The escaped emotions could not be found on the Enterprise. The four officers are suddenly approached by a tall, powerful beast; they try to stun it with their phasers, which have no effect. Spock panics and pushes Kirk away when he tries to calm him. The creature retreats, but Spock runs in the other direction, crying out in fear, while McCoy yells after him that he's a coward…

Captain's log, star date 11:26.8
While in orbit around planet Pollux II, a surprise attack from the surface has accidentally released the bottled emotions of the Vulcan founders – and set them loose in the Enterprise. Upon beaming down to investigate the attack, First Officer Spock has lost control of himself for the first time – and panicked!

McCoy continues yelling insults after Spock. Kirk orders him to stop, and strikes him with his phaser when he does not. Scotty begins to laugh uncontrollably as Kirk hits McCoy again. As Kirk moves toward Scotty, the three men recover from their abnormal emotions, which McCoy blames on overwork. Kirk leads them off to find Spock and the others. Meanwhile, Sulu is hanging off a cliff and cowering from a rabbit-like creature at its base, and two other crewmen are fighting over which of them should save a female crewmember from a large lizard, while the young woman laughs uncontrollably.

Spock, unable to understand his emotional lapse, discovers a transparent dome full of electronic equipment and topped by an antenna assembly – the source of the ray attack on the ship. Inside the dome a diminutive, bug-eyed alien wearing a large metal helmet is seated on a throne-like chair. Spock hears the voice of the alien, Malok, inside his head. Malok declines to let Spock inside the dome, which no one has entered in five thousand years. Malok is immortal, and is therefore very bored. He decided to live the lives of other people and built his equipment to capture passing ships. The Enterprise crew has given him his most intense emotional experience. A tall, scaly creature appears behind Spock, who is again terrified and runs into the jungle.

Spock forces himself to master his emotions in the Vulcan way. He then finds Kirk, McCoy and Scotty and leads them to the dome, where they are mesmerized by Malok's telepathy. The other members of the landing party enter the clearing, also mesmerized; at Malok's command, their emotions again run rampant. Realizing the truth, Spock goes behind the dome and cuts his way in with his phaser. He reconnects several wires, causing his crewmates to scream and collapse. The Vulcan emotions are released from their bodies, and, after several anxious moments, they revive. Kirk and McCoy are stunned to see a rapid succession of emotional states passing over Malok's face; he has absorbed the Vulcan emotions, which he will continue to experience for eternity.

Having freed Malok's other prisoners, the landing party returns to the Enterprise, where Spock explains that McCoy mistook the effects of the Vulcan emotions for overwork. The Vulcans will be satisfied that the emotions have been put to a useful and logical purpose. 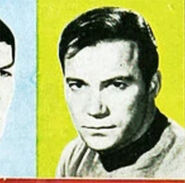 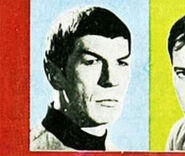 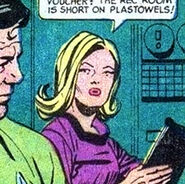 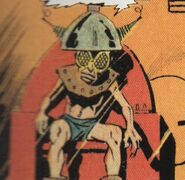 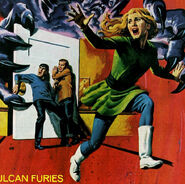 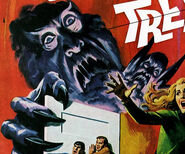