"The Child" was the 26th episode of Star Trek: The Next Generation, the premiere episode of the show's second season, first aired on 21 November 1988. The episode was written by Jaron Summers, Jon Povill, and Maurice Hurley, and directed by Rob Bowman.

Captain's log, stardate 42073.1
There has been an outbreak of an unclassified plasma plague in the Rachelis system. We're on an emergency run to collect specimens of the deadly plague and transport them to Science Station Tango Sierra where hopefully an antidote can be produced.
Captain's log, supplemental
We have finally arrived at 'aucdet IX where we will pick up the specimens of plasma plague for transport to Rachelis. It is only because so many lives are at stake that I'm willing to put this ship and crew at great risk. Meanwhile, Counselor Troi's pregnancy continues to progress at an astonishing rate.
Captain's log, supplemental
Although it's been nearly 14 hours since we arrived at 'aucdet IX, Hester Dealt has still not completed his inspection of the containment unit. The transfer will not be permitted until he is assured of zero growth during our voyage. Meanwhile, the desperate pleas from the Rachelis system continue.
Captain's log, supplemental
We are faced with two major problems–Troi's child and the deadly cargo we're about to take on. In the hours since his birth, Troi's baby has continued his rapid growth and now appears physically and mentally to be a child of eight. Still, there is no indication as to who he is or why he is here.
Captain's log, supplemental
For reasons as yet unknown one of the deadly specimens of plasma plague has begun to grow.

2294–2295
The research team of Susan Nuress investigates an outbreak of plasma plague on the northern continent of Oby VI. To counter the outbreak, Doctor Nuress and her team developed a mutated strain which grew more rapidly when exposed to Eichner radiation. The research developed by her team was listed in an etiological report and was still viable in 2365. (prior to episode)
2364
Beverly Crusher leaves the Enterprise to become the head of Starfleet Medical. (prior to episode)
stardate 42073.1, 2365 (2360s chronology, Enterprise-D voyages)
Rendezvous of Enterprise and Repulse.

VHS release with "Where Silence Has Lease". 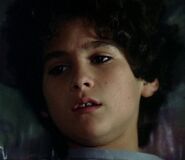 Pacelli and Daneeka followed by entity. 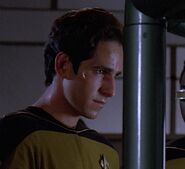 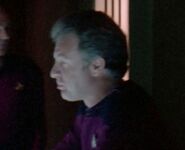