For other uses, see The Choice.

17:01.02
KIRK VS. KIRK! A duel to save the Universe from OBLIVION! – "The Choice" was a Star Trek comic book story published by Gold Key Comics in 1975. It was the last story written by Allan Moniz and the 30th drawn by Alberto Giolitti. In this story, while exploring an intersection between two universes, the USS Enterprise encountered a second Captain Kirk.

You've all heard the story of the Lady and the Tiger! Well, just suppose, for a moment, that instead of the lady or the tiger, behind those doors were the divergent courses of infinite universes! And, that one man has been placed in front of these doors to decide which path the universe shall follow! Then, imagine that your exact twin shows up and tells you to stop supposing because this is exactly what is going to happen! Now you have an idea how Captain Kirk feels in… The Choice!

Captain's log, star date 17:01.02. After a rather hectic two-week leave on the resort planet Lado, the Enterprise crew was immediately assigned a new high-priority destination! Our orders are to proceed to the vast and little known quadrant Mark 1, in the capacity of scientific exploration! Recent developments in para-astronomy have pinpointed a hotbed of telltale radiation there! Scientists now believe this area to be the site of the Big Bang! Or, in other words, the birthplace of the universe!

When they entered the region, sensors read blank and the ship's dilithium crystals went cold. Spock speculated that they might have entered a subspace parallel universe, perhaps within the primordial atom itself. A small capsule was discovered which contained James T. Kirk (alternate), a Kirk not from their universe but from the universe which existed before it.

Captain's log, star date 17:02.??: Trapped in a timeless, placeless void, inside the one piece of matter that exists from universe to universe, I have been confronted by my own double! He claims to come from the previous universe, come here to warn the one being, somewhere in the cosmos, whose life is not predetermined, to make the right choice! Who that being is, where he is, and what it the right choice, all remain a mystery! But all that matters now is the universe isn't big enough for both of us! One has to be left behind if any are to survive!

Since only one Kirk could exist in the normal universe, the two Kirks agreed to a duel to decide who would stay. They fenced with épées, phasers and their starships. The alternate Kirk mentally controlled a duplicate USS Enterprise decoy. By suddenly cutting shields, a hit from the decoy rocked the Enterprise, giving Kirk the upper hand in their fight. The alternate Kirk demanded that Kirk kill him, but he didn't. The alternate Kirk and his ship then faded away. A ghostly alternate Kirk then appeared, revealing that not killing him was the pivotal moment of free will.

Captain's log, star date 17:02.03… A week has passed since our escape from the primal atom and we still make our way back to starbase! This morning I had the following conversation with Mr. Spock…

Kirk wondered whether everything they did had happened before and would happen again. After Kirk asked why bother to do anything, Spock rhetorically answered whether they had a choice. 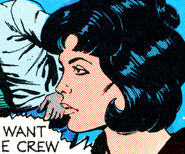 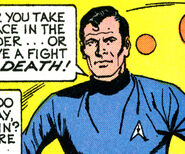 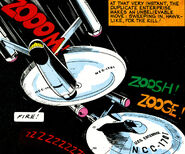 Attacked by a second Enterprise.