The Covenant of the Crown

The Original Series No. 4

An Enterprise shuttle is forced to crash land in a violent storm on the barren planet Sigma 1212. Spock, McCoy, and Kailyn, the beautiful heir to the Shaddan throne, survive in the near disaster.

Now, pursued by primitive hunters and a band of Klingon scouts, they must reach the mountain where the fabulous dynastic crown is hidden. With the help of Spock and McCoy, and her own fantastic mental powers, Kailyn must prove that she alone is the true heir to the throne.

If they fail, they will open the door for Klingon takeover of the whole quadrant - and the galaxy's hope to live long and prosper will fall in the shadow of a cruel tyranny.

A civil war on Shad between factions who favour the Federation and the Klingons is nearing a victory for the loyalist side. Eighteen years ago, the then-Lieutenant Commander James T. Kirk convinced Shad's king Stevvin to go into exile. Now he is needed to hold his supporters together at the point of victory and he has insisted Kirk transport him.

However, Kirk and his crew quickly discover that Stevvin is dying. He wishes for his daughter Kailyn to replace him as queen but she will only be accepted if she can wear the Crown of Shad and turn its crystals opaque by channelling the Power of Times, a low-level telepathic field. Spock, McCoy and Kailyn depart in a shuttle to Sigma 1212, where the crown is being kept safely.

Kirk is charged with uncovering which of Stevvin's servants is feeding information to the Klingons and does so by following the servant who informs Klingon Intelligence of the king's death. Spock, McCoy and Kailyn make contact with the local ruler to whom Stevvin entrusted the crown. However, Kailyn has fallen in love with McCoy and his rejection affects her emotional control, meaning she is unable to channel the power. She later takes the arduous trek to its hiding place alone to try again and this time succeeds.

A Klingon scout ship has followed them to the planet but most of its crew are killed in a storm and the survivor is easily taken prisoner. Spock, McCoy and Kailyn get off the planet in their ship, confusing a Klingon cruiser long enough for the Enterprise to safely beam them aboard. Kailyn is taken back to Shad and crowned as queen.

Great Hall of the Temple of the Covenant • Kinarr Mountains • Treaton 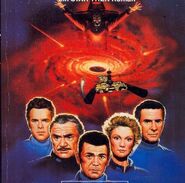 Art from Disney's The Black Hole. 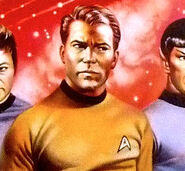 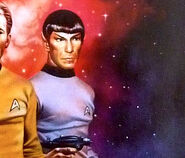 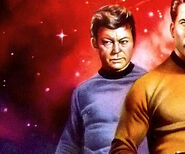 Retrieved from "https://memory-beta.fandom.com/wiki/The_Covenant_of_the_Crown?oldid=733202"
Community content is available under CC-BY-SA unless otherwise noted.