"The Crucial Element" was a Star Trek: The Original Series comic strip published in 1969. It was the second story in the UK comic strips series, and was released in four parts, in issues of Joe 90: Top Secret.

In this story, spores infected a landing party from the USS Enterprise and incited a mutiny.

As a landing party explores the surface of Crucial III, an analysis by Spock confirms that the planet will explode imminently. The party hastily returns to the USS Enterprise in their space wagon, and the starship leaves orbit just in time to avoid shock waves from the explosion. But in the ship's workshops, the seven crewmembers of the space wagon fume with frustration, and Hurst leads the group to confront James T. Kirk. Kirk and Leonard McCoy try listening to their complaints, but McCoy realizes that the men have all been contaminated by poisonous pollen and driven almost to the point of insanity. Kirk and McCoy are dragged into Bay 4 and shoved into Space Bug 7 along with two other crewmen. Mutineers wreck the space wagon's communications system and set the ship adrift. Unable to stop them on the bridge, Spock seals off control areas to protect the rest of the ship.

Kirk makes a rough landing on nearby planet Vultra. A Vultran shuttle quickly approaches, and the Starfleet officers are met by Zella, chief of the planet's army. He says their sun is growing dim and their planet will soon die a frigid death. Zella demands Kirk's ship to escape, but Kirk hastily secures the wagon with a voiceprint. Angrily, Zella locks Kirk's team in a prison cell to be beaten by savage Valtarii. Zella again appeals to Kirk, taking the Starfleet team on a tour of Vultra, with a Vultran scientist mentioning that they only have interplanetary ships and are unable to leave their star system. Zella secretly records the conversation, and when Kirk inadvertently speaks the voice override command, the jig is up. Zella and the scientist abandon Kirk and take off in his space wagon. Kirk asks to see the interplanetary Vultran spaceships, and is inspired to a solution: engine modifications and a merging of two ships will result in a viable interstellar vessel.

Hurst and his men detect Space Bug 7 approaching, assume Kirk is returning, and blow it up. From the bridge, Spock sees the explosion and is driven nearly to a rage to stop Hurst's men. However, Spock's assault is repelled. He devises a counter-agent to the spores and sprays it into the air. Hurst's head clears almost immediately, and he takes a team to Vultra in Space Bug 4 to rescue the captain.

Kirk later says the mutineers will not be punished because they were not in control of themselves. At least two dozen Vultran ships are launched from Vultra on their exodus to another star system.

The presence of Bailey on the Enterprise places this story early in the year 2266, before the events of "The Corbomite Maneuver". The stardates for the issue place it before the preceding, and first, story arc in the UK comic strip series. 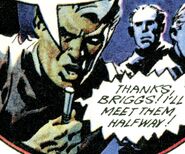 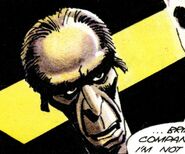 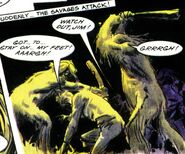 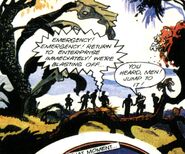