The Original Series No. 17

Captain's Log, Stardate 8263.5
On routine patrol, ship's sensors have picked up strange and powerful energy readings from a small cargo ship. The Excelsior has intercepted the craft, but its crew has ignored our hailing calls, choosing instead to run. At the conn, Lieutenant Commander Sulu has elected to pursue. As my first officer, Sulu has proven his abilities and his loyalty again and again. But as his friend, I can also understand the one thing he desires most: a command of his own.

The Excelsior crew captures the fleeing cargo ship and its two crewmen, discovering they are smugglers of dilithium crystals. Admiral James T. Kirk interrogates the smugglers, threatening to use a truth serum on them. When Doctor McCoy mentions the potential side effects, the smugglers tell Kirk that they picked up the crystals on Cetus V for delivery to the black market on Orillius 1. With the information in hand, Kirk and McCoy drink down the "truth serum," a recipe taught to the doctor by a bartender on Phebus.

Nancy Bryce speaks with Lieutenant Commander Nyota Uhura about her feelings for Konom. Uhura tells the young officer to pursue her feelings if they're truly important to her. The senior staff meets to discuss the smuggler situation where it is learned that the owner of space station Orillius 1 is Kabaka Buganda, a former lover of Uhura's. Sulu volunteers for the mission to Orillius 1, assigning Ensign Bearclaw and Uhura to accompany him aboard the captured cargo ship.

Captain's Log, Stardate 8263.5
With repairs completed, Sulu and Uhura and Ensign Bearclaw are departing for the space station Orillius 1. Meanwhile, the Excelsior has plotted a course for the planet Cetus V. Our goal the same: to learn the secret behind the ring of smugglers.

D'Artagnan Ship Log, Stardate 8265.6
After a two-day journey, we have arrived at Orillius 1 space station.

Hails from the D'Artagnan are ignored by the space station, making Bearclaw edgy. Sulu orders the ensign to run toward the station with a split-second thrust from the warp engines. The gambit finally opens communications and the undercover Starfleet officers are escorted inside where they are taken prisoner by Ste-Zar. Buganda eventually arrives and subdues his over-eager lackey using a whip. He and Uhura are reunited after many years and share a passionate kiss.

Captain's Log
Stardate 8265.6. With the Excelsior in orbit around the planet, I am beaming down to the surface of Cetus V to continue our investigation.

Kirk, McCoy, and Saavik beam down to a location overlooking a slave camp with a security detail. Saavik notes that the slaves, forced to mine dilithium crystals, are not native to the planet. Kirk then leads the liberation of the camp, assuring the former captives that no more slavers are coming.

Meanwhile, aboard the Orillius 1 station, Buganda apologizes to Uhura and her friends for the ill-mannered welcome. When asked about Starfleet, Uhura responds that she, Sulu, and Bearclaw were discharged for their roles in stealing the USS Enterprise. Buganda sends Sulu and Bearclaw to survey the D'Artagnan with his lieutenant, Jones. He and Uhura then discuss how their lives going in opposite directions resulted in their parting.

On the shuttlecraft deck, Sulu and Bearclaw learn that slave trafficking is taking place aboard the station. When Buganda goes to deal with the situation, Uhura checks in with Sulu unaware that she is being monitored. Buganda confronts his former lover as she tries to escape. Uhura punches him in the face, but Buganda retaliates just as forcefully. Sulu intervenes and suggests that they'd better leave.

Captain's Log, Supplemental
One of the former slaves from the mining colony has agreed to take us to a nearby city. There, he tells us, we will find the dominant life-forms of the planet Cetus V.

The landing party finds a city surrounded by water. Saavik hypothesizes that the city was originally located below the surface of oceans that completely covered the planet. Fish-like humanoid denizens of Cetus V surface asking if the landing party has brought water, revealing that Buganda promised water in exchange for the dilithium crystals on the surface. Kirk informs the aliens that the planet's sun has become a red giant, which will soon vaporize the rest of the planet's water. Kirk offers to have the Federation relocate them to another planet and puts Saavik in charge of determining their needs.

D'Artagnan Ship Log, Stardate 8265.7
We have left the space station Orillius 1 and are now underway to the rendezvous with the Excelsior.

A fleet of dilapidated ships accompanying a cruiser is bearing down on the D'Artagnan. Bearclaw determines that unless the cruiser can separate from its fleet, their ship is safe. Sulu orders Bearclaw to head into the center of the fleet and disable as many vessels as possible. The disabled vessels begin to effectively block the others, but Buganda orders his crew to blast the crippled craft out of the way. With time now critical, Sulu transports himself and his crew onto a lower deck of Buganda's cruiser. After witnessing his first command destroyed, Sulu is accosted by the slaves aboard for freedom and leads them in revolt against their former master.

Captain's Log, Stardate 8266.9
We have been at the rendezvous point for several hours and still have received no contact from Mr. Sulu or any of his crew.

Sulu hails the Excelsior from the captured cruiser, informing Admiral Kirk of the large number of prisoners aboard. Buganda asks to speak with Uhura. She allows him a moment; he says the question he's thinking of asking is why, but he thinks he knows the answer. Uhura tells him it was responsibilities—the same answer from 20 years ago—to the Federation, to herself, and to life, that must be met. Buganda says he feels sorry for her, but the Excelsior communications officer states that she's lucky to have her life. 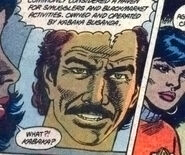