summer 2255
The Delta Anomaly was the first book in the Starfleet Academy series. A young adult novel, by Rick Barba, the book was published by Simon Spotlight in trade paperback, hardcover and eBook formats in November 2010. The novel was the first original prose publication set in the Kelvin timeline.

From the back cover
After a rough week at Starfleet Academy, James T. Kirk and his friends blow off steam at San Francisco's hottest new club. Their good times come to a screeching halt, however, when one of the cadets is attacked by someones who seemingly appears out of thin air.

Bones and his medical team save the cadet's life, but they uncover the horrifying consequences of the attack. Meanwhile, Starfleet's investigation reveals the assailant is actually a brutal serial killer from the past - a mysterious entity known only as the Doctor. Who is the Doctor, and why has he returned after disappearing more than twenty years ago?

At the urging of Commander Spock, Cadet Uhura is called to decipher a message from the Doctor. Spock has no idea that by enlisting Uhura's help, he has placed her firmly in the Doctor's sights.

Before long Kirk, Uhura and Bones are caught up in the Doctor's dangerous web as they race against time to stop the killer before he strikes again.

San Francisco, summer 2255: Jacqueline Madkins, head of security at the Transamerica Pyramid, investigates when the beacon chamber camera goes offline; a cloud of black smoke renders her unconscious. Starfleet Academy Cadets James T. Kirk, Leonard McCoy and Glorak, a Tellarite, visit a new holo-karaoke bar, the Delta Quadrant. Also at the club are Cadets Uhura and Gaila; the Orion woman is extremely drunk. Kirk, McCoy, Glorak and the Xannon Cadet Braxim plan to escort Gaila to her dorm, but Uhura discovers that she has left through the restroom window. The five cadets search for her; Kirk and Braxim find her in an alley being attacked by a huge figure of black smoke. The creature attacks Kirk, but when Braxim approaches with his open communicator, having called 911, the creature speaks to Braxim in an unknown language and then vanishes.

At Starfleet Medical College, McCoy examines Gaila, discovering a black residue on her skin and a contaminant in two of her internal organs, one of which is unique to Orion females. At Command College, Team Delta, led by Kirk, takes on Cadet Viktor Tikhonov's Team Alpha in the Advanced Tactical Training Security mission final, the Derelict Cairo scenario. McCoy and Dr. Naamba Reyjik analyze a sample of the substance from Gaila's body, which tries to escape the quantum containment chamber; meanwhile, the remaining contaminant vanishes from Gaila's body. Tikhonov wins the Security challenge, distracting Kirk while sneaking up on him through a turbolift shaft.

Uhura and Kirk are summoned to Vice Admiral Tullsey's office, where they meet Homicide Detective Harve Bogenn of the San Francisco Police Department. Another Orion woman was attacked the previous evening and did not survive. Bogenn tells them of a serial killer known as the Doctor who terrorized San Francisco in 2237, removing internal organs without leaving incisions. The dead Orion woman is missing two organs. On the recommendation of Commander Spock, Uhura's instructor, Bogenn asks her to analyze the language spoken by the creature in the recordings of Braxim's and the dead woman's 911 calls. McCoy, Reyjik and two other scientists observe the alien substance through a quantum microscope as it destroys an amoeba and then recreates its shape.

Kirk visits Brewsky's, a coffeehouse, where he flirts with Hannah, a barista and grad student in botany. Kirk tells Hannah about his upcoming Science mission final, the Tanika Station scenario, in which the Alpha and Delta teams will explore a "discovery setting". Hannah warns Kirk that his presence in a "discovery setting" changes it. Near the Palace of Fine Arts, Kirk sees and chases the Doctor, which addresses him by name before moving away too fast to follow.

At Mount Zion Hospital, a black haze emerges from the unconscious Jackie Madkins. Uhura realizes that the Doctor's phrases have Romulan rhythms, although not Romulan words; sixty-two Romulan phrases match the rhythms in question. McCoy introduces Kirk to Dr. Parag Chandar, a nanotechnology expert. The black particles are nanites, each with massive computing power and bearing a white glyph on one side. When linked together, the swarm of particles is a powerful supercomputer that can scavenge organic materials to create new nanites. Uhura narrows down the possible phrases to variations of "Your [NOUN] has already been [PAST TENSE VERB]." She does not notice a thin cloud of smoke entering her closed window.

Kirk helps some other cadets place a live chicken in Tikhonov's room. Kirk and McCoy learn that Uhura is in intensive care after a fire alarm went off and two cadets heard her coughing; all three suffered "smoke inhalation", but there was no fire. At the hospital, a black haze emerges from Uhura's body and disappears. Kirk returns to Brewski's; he and Hannah go for a cable-car ride. Spock visits the recovering Uhura in her hospital room to review her lab work. Walking down Columbus Avenue, Kirk and Hannah see silent flashes of light near the top of the Transamerica Pyramid; they are then approached by three members of a gang called the Mongol Saints. The Cheetah3000 processor in the Academy cryptology lab decodes the glyph on the nanites as a date and origin stamp containing a 3-D image of the Milky Way Galaxy. The map marks Earth as the swarm's destination and a location in the Delta Quadrant as its point of origin. The bottom quarter of the glyph represents the number 5618. Kirk uses an emergency transporter band to beam Hannah to the Academy shuttle hangar while he defeats the gang members.

As Team Delta prepares to head to Tanika Station, Braxim mentions that his people migrated to New Xannon from the Delta Quadrant. McCoy gives Kirk a present from Hannah, a botanist's eyepiece. Tanika Station is full of lush alien vegetation around a central lake. McCoy and Chandra have realized that the Doctor used the swarm to remove the organs from within his victims' bodies, and is probably an alien from the Delta Quadrant. After the attack on Gaila the Doctor spoke to Braxim, whose species is from the Delta Quadrant. Uhura realizes that the killer's words consisted of scrambled fragments of Romulan and Xanno. Kirk's team discover complex, fast-growing plants along the lakeshore, amalgams of species from elsewhere in Tanika Station. Kirk orders his team not to take samples from the plants, which may be intelligent. He realizes that the Doctor is a scientist collecting specimens. Kirk's team are alerted to a hull breach and evacuate the station.

Uhura translates the Doctor's words to Braxim as "Your species has already been absorbed" or "assimilated". The Doctor's words from the Orion woman's 911 recording describe her species as unknown and order the swarm to regroup at a place specified by a holo-image: the Transamerica Pyramid. Kirk's team receives the assessment of their test's programmer that their actions were "the most correct and most logical response possible"; the plants were indeed highly intelligent. On Kirk's return McCoy tells him they have found the Doctor's lair.

Kirk, McCoy and Uhura head to the Transamerica Pyramid. McCoy gives Kirk a phaser pistol modified to vaporize the nanites, an ultrasonic sound emitter that freezes them, and a portable vacuum unit. Uhura has customized a computer to translate the Doctor's speech. Kirk and McCoy enter the spire and fight the nanites; at the top of the ladder to the beacon chamber, the hooded Doctor and four similar figures await them. Kirk fires on the figures, revealing that they are coalesced swarms of nanites. As the nanites overcome Kirk and McCoy, the remaining "Doctor" figure metamorphoses into Kirk's likeness; Kirk loses consciousness. The figure speaks; Uhura translates its words, heard through Kirk's microphone, as "Assimilation is not advisable at this time... proceed to recharging chamber." Recovering, Kirk realizes the tower's aviation beacon is a disguised starship; he fires at it, blowing off the top of the spire. The swarm forms itself into a cube and flies away too fast for Kirk to fire again.

Uhura's computer is unable to identify the significance of the number 5618. Spock tells Uhura that the alien ship left Earth at a high transwarp velocity, possibly on its way back to the Delta Quadrant. Hannah invites Kirk to "study" with her at her apartment. 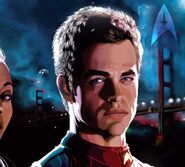