The Devil's Isle of Space

The Devil's Isle of Space

Prisoners on the planet of the condemned sentence Captain Kirk to share their fate! — "The Devil's Isle of Space" was the second issue of the TOS Gold Key Comics series. It was written by Dick Wood and drawn by Nevio Zaccara. Published in March 1968, it was also notable as being the fifth licensed Star Trek story, behind only "The Planet of No Return" and stories in A Book to Color.

Mr. Spock was powerless to help as Captain Kirk and his exploration team battled for their lives on a mysterious asteroid. And Mr. Spock would soon uncover the asteroid's terrifying secret, a secret which would challenge him with an impossible choice: either risk the star ship Enterprise and all her personnel, or abandon his captain to certain death!

The Devil's Isle of Space, Part I[]

Captain's log, stardate 19:03.4
On the outer fringe of the galaxy Nabu, came upon a strange belt of uncharted asteroids - strange for obvious reasons.

The asteroids are glowing, like nothing the crew has ever seen before. Captain Kirk orders the navigator to set a course to the nearest one, but upon reaching it, the Enterprise becomes caught in a electronic field shielding the planet. Kirk leads a landing party to the planet to discover the source.

On the planet, the party discovers machines that dispense food, water and clothing. They are then attacked by a group of humanoid aliens led by Targu, but Kirk convinces them of their friendly intentions. Targu explains that he and his men were marooned on the asteroid a year ago when their freighter crashed, but claims to know nothing about the electronic field.

The party finds the crashed ship, but learn from Spock that it was not a cargo ship. Another alien, Lara, arrives to tell him the truth: the aliens are convicted criminals exiled via rockets to glowing asteroids where they await execution. Targu sees Lara talking with Kirk and attacks the landing party, capturing them in a net.

On board the Enterprise, Spock and Scotty manage to free the ship from the force field, but find that they cannot beam up the landing party without bringing the convicts with them. Furthermore, Spock discovers that the asteroid will explode within 24 hours.

Captain's log, stardate 19:04.5. We are in a desperate plight! Mr. Spock has just informed us that the criminal asteroid we are upon is due to explode within 24 hours… and there is no chance of escape without endangering the Enterprise and her mission…

Targu tells Kirk how he came to the asteroid and made himself leader of the other criminals who were also stranded there. He contacts the Enterprise with Kirk's communicator and demands that Spock beam up him and his men. Spock refuses, and Kirk orders Spock to take command of the Enterprise and to take the ship far away from the asteroid. Spock obeys the first order but not the second, reasoning that since Kirk was not in command when he gave it, he is not bound to it. Spock sends a rescue party to the asteroid in a ship disguised as a rocket bringing more convicts. The landing party is freed and beamed up to the Enterprise, which departs shortly before the asteroid explodes. 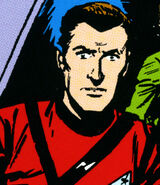 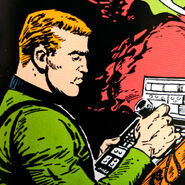